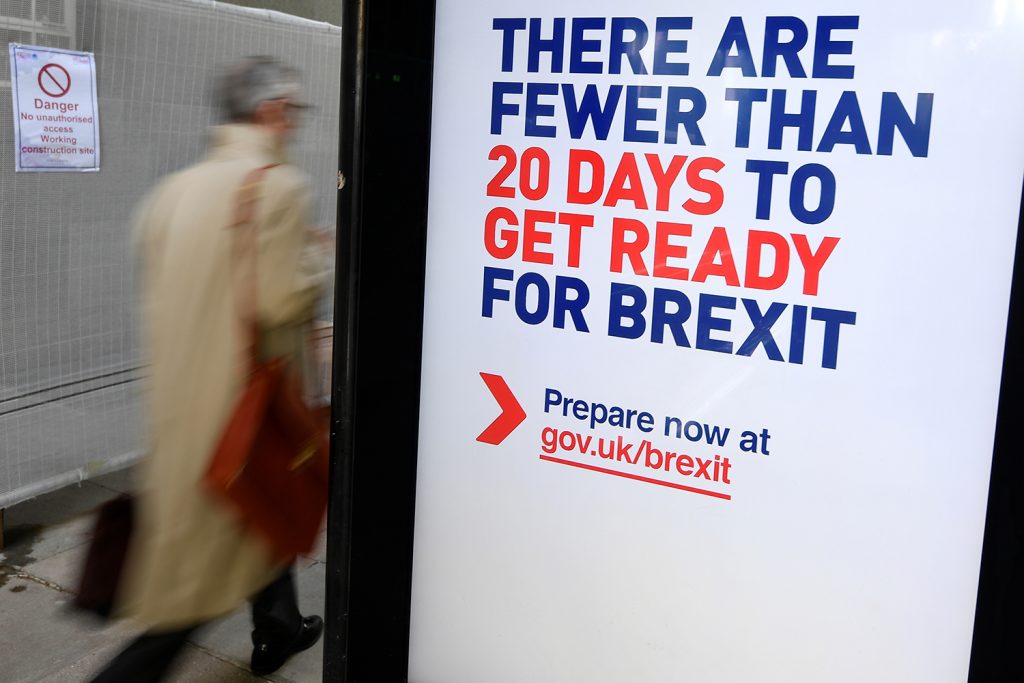 The European Commission wants the terms of an agreement for the UK to leave the European Union to be finalized before the next European Council opens in Brussels on October 17, since the traditional duty of the heads of government meeting there is to approve or reject whatever needs to be decided, rather than to continue debate on specific terms.

But British Prime Minister Boris Johnson has set the clocks at his official residence at Number 10 Downing Street to mark the days and hours until midnight on October 31, his constantly repeated deadline for Britain’s exit from the European Union.

If Johnson’s negotiators can somehow secure an agreement by midnight on October 17 or, to be realistic, manage to secure sufficient progress to ensure that talks continue even while Europe’s leaders are meeting, then there’s a chance that the champagne will start to flow at Downing Street on Halloween.

But if no deal is struck in the next forty-eight hours or so, then the UK’s House of Commons is likely to witness scenes of frenzied activity on October 19 as it gathers for an extremely rare Saturday sitting to consider the outcome of the Brussels summit. The same applies if the deal is too controversial to secure a parliamentary majority, since the ruling Conservative Party is currently twenty-three votes short of an overall majority in the 650-Seat House of Commons, not least because of the expulsion of twenty-one MPs from the party on September 5 after they rebelled against the Government in order to back legislation preventing a no-deal Brexit.

When the Commons meets on October 19 it will gather to consider various potential courses of action. The most immediate issue will be whether Parliament needs to take further action in support of the legislation—passed against the wishes of the Government—that mandates the prime minister to request an extension to the October 31 deadline if he has failed to secure a deal by October 18. The Government has said it will comply with this legislation, but its continued insistence that Britain will leave the EU on October 31, and talk of the prime minister sending a second letter that would effectively countermand the first, has raised concerns that any ostensible compliance will be accompanied by moves to negate the request.

If it looks as if the Government is trying to ensure there is no extension, and that Britain looks to be crashing out of the European Union without a deal on October 31, that increases the prospect that the Commons will both hold—and pass—a vote of no confidence in the Government. This would once have been expected to prompt the immediate resignation of the prime minister, but the Fixed Term Parliament Act passed in 2011 makes the situation more complicated since it allows for a fourteen-day period in which the prime minister can soldier on in office if he can convince the Queen that nobody else can command a majority, thus placing the onus on the opposition parties to unite sufficiently to support an alternative nominee for the premiership.

At present, the fractured nature of the opposition makes it far from clear that they will be able to unite behind the most prominent potential nominee, Labour leader Jeremy Corbyn, even if it is just on a caretaker basis pending an election.

But what if Johnson does manage to secure an agreement with Brussels? For once, Downing Street has been extremely tight-lipped on the negotiations, which is probably the best indication that the government is seriously trying to reach an agreement.

If there is an agreement, it will then have to secure parliamentary approval. Obviously, much will depend on the precise terms of the agreement. But two points can be made. Firstly, the Government currently relies on the support of nine MPs from Northern Ireland’s Democratic Unionist Party for routine legislation. The question of how any deal to leave the European Union can be squared with commitments to ensure there is no customs border on the island of Ireland remains highly controversial.

On the one hand, the 1998 Good Friday agreement that ended thirty years of “The Troubles” relies considerably on the fact that there is no hard border between the British province of Northern Ireland and the independent Republic of Ireland; on the other, the British government is preparing to leave the European Union’s Customs Union and Single Market, while the Republic of Ireland as a full EU member state, will remain inside them. There is no guarantee that the DUP will support what seems to be the current government proposal, that it is prepared to conduct EU-related inspections and collect EU-related duties on goods passing between Northern Ireland and the rest of the UK, in effect creating a customs barrier between one part of the United Kingdom and another.

Secondly, can the Government win over a sufficient number of MPs from other parties, notably Labour MPs representing areas that voted to leave the EU in the 2016 referendum, to secure an overall majority? This remains doubtful, but not impossible.

A major development in recent days is the increasing prospect that the opposition will unite sufficiently to add an amendment to any Brexit bill that insists the UK’s actual departure should first be subject to a confirmatory referendum. The Government is fiercely opposed to such a referendum, but it may turn out to be the only way in which it can secure a majority for any Brexit legislation it brings to Parliament.

There are other possibilities. The turmoil may well continue, with little or nothing resolved except that the Government, kicking and screaming, duly requests an extension and then seeks to call a general election in an attempt to gain sufficient extra seats in a new House of Commons to pass its Brexit legislation.

In a sense, that seemed to be the purpose of the speech delivered by Queen Elizabeth II to Parliament on October 14, written for her by the Government, in which she announced a series of bills that have no chance of becoming law unless Boris Johnson can first secure an election victory.

So soon there may be two more potential countdowns. One to a referendum, which would take about six months to organize, and one to a general election, which could be held in late November or early December.

As to what might constitute the final countdown, perhaps one should simply remember that The Final Countdown was a smash hit in 1986 and included the lyrics:

“We’re leaving together, but still it’s farewell. And maybe we’ll come back.”

And who recorded the song? A Swedish group—called “Europe.”