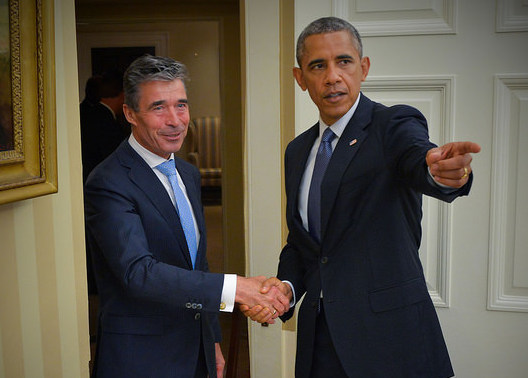 NATO Secretary General Anders Fogh Rasmussen thanked President Barack Obama for his country’s leadership within the Alliance and strong commitment to transatlantic security during talks with the United States president at the White House on Tuesday (8 July 2014) which focused on preparations for this September NATO Summit in Wales. “I am particularly grateful for the support the United States has provided in response to Russia’s unacceptable actions in Ukraine,” the Secretary General said.

All 28 Allies stand together in rejecting Russia’s aggression and all are playing an important part in NATO’s response to the security challenge, he said. “At our Wales Summit in September, we will take further steps, to ensure that NATO is prepared to face any threats. But readiness requires resources so at the Summit we will also seek a common commitment to reverse the decline in defence investment,” said Mr. Fogh Rasmussen.

At the Wales Summit, Allies will also turn a new page in Afghanistan. NATO will at the end of this year complete its longest combat mission and has already started to prepare to train, advise, and assist the Afghan forces after 2014. “We have achieved a lot, but not without cost. and I want to pay particular tribute to the sacrifice made by American forces in Afghanistan,” the Secretary General said. Mr. Fogh Rasmussen stressed that “the electoral process in Afghanistan must run its course to a transparent and credible conclusion. This is vital for the future of Afghanistan and for continued international support”.

The Secretary General underlined that the Summit will also be an important opportunity for NATO to reinforce its work with partners, including those who have fought alongside Allied forces and to reach-out further to help build defence capacity in countries where crises can be prevented.