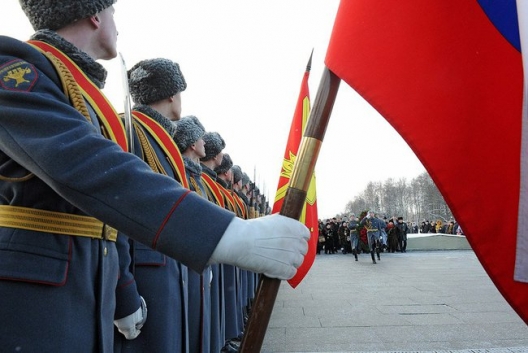 70th anniversary of the lifting of the siege of Leningrad (photo: Office of the President of Russia)

The following excerpt is from the Worldwide Threat Assessment of the US Intelligence Community, delivered by Director of National Intelligence James R. Clapper to the Senate Select Committee on Intelligence, January 29, 2014.

Putin’s 2012-2013 crackdown on the opposition defused the popular challenge to his hold on power; however, the Kremlin confronts a growing trend of opposition politicians taking their fight to the local ballot box. This trend was illustrated by the consolidation of support in Moscow around a single opposition leader—Aleksey Navalnyy—who finished second in Moscow’s mayoral election in September 2013.

The Kremlin also faces a rise in ethno-religious tensions—as underscored by the October 2013 riot in the outskirts of Moscow—which will probably grow as the Muslim population in Russia increases. Moscow must balance an increasing immigrant Muslim population needed to offset its shrinking labor pool against growing nationalist sentiment among the ethnic Russian population.

In February 2014, Russia will host the Winter Olympics in the Black Sea resort of Sochi—an area bordering the turbulent North Caucasus region where Russian security forces have battled a local insurgency for the past 20 years. We have seen an increase in threat reporting just prior to the Olympics, which is not unusual for a major international event, and have offered assistance to the Russian Government.

Putin’s claim to popular support and legitimacy as head of the Russian state has rested in part on a record of economic growth and the promise of stability, increasing prosperity, and relative personal freedom. The Organization for Economic Cooperation and Development (OECD) projects that the Russian economy will grow by 2.3 percent in 2014, putting at risk a number of ambitious Kremlin projects—including the $700 billion defense modernization plan, the 2018 World Cup, and social welfare enhancements pledged by Putin during his 2012 election campaign.

Moscow has hailed its CW initiative in Syria as a major foreign policy accomplishment. It positions Russia to play a major role in any future settlement of the Syrian conflict and adds legitimacy to the Syrian regime. Russia also will almost certainly continue to seek to fill the vacuum it believes is developing between the United States and Egypt.

The campaign to keep Ukraine from signing an Association Agreement (AA) with the European Union (EU) underscores the importance the Kremlin continues to attach to its goal of Eurasian integration. Russia will have to compete for influence with the EU in the West and increasingly with China in Central Asia; both will pose challenges to its pursuit of Eurasian integration.

The Russian military remains a symbol of Russia’s national power. Following measured improvements to its capabilities in the past year, it is setting its sights on the long-term challenges of professionalization and rearmament. The new leadership that assumed command of the military last November has made many tactical adjustments to the sweeping reforms the military enacted in 2008, but has largely kept the military on the same strategic trajectory.

The military in the past year has taken an increasingly prominent role in out-of-area operations, most notably in the eastern Mediterranean but also in Latin America, the Arctic, and other regions, a trend that will probably continue. Moscow is negotiating a series of agreements that would give it access to military infrastructure across the globe. These bases are generally intended to support “show the flag” and “presence” operations that do not reflect wartime missions or a significant power projection capability.