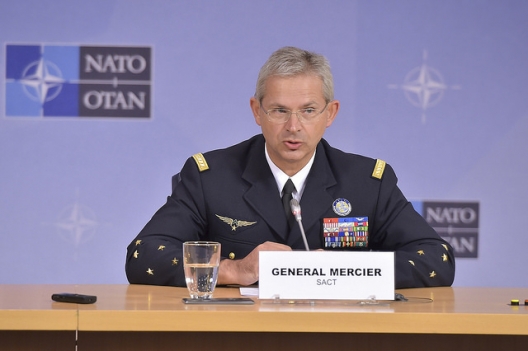 [W]hile Nato’s troops are ready for a rapid reaction on home turf, the heads of government in its member states are not, warns its top military commander….

“It’s one of the lessons from Ukraine,” says General Denis Mercier, former head of the French air force and now supreme allied commander for transformation, one of the two top military jobs in Nato. “High responsiveness relies on two points. On the military side it relies on the ability to operate very quickly. But it also relies on responsiveness in political decisions….”

“We can have forces ready to deploy in 24 hours but they are only going to do that if the NAC gives them the order,” Gen Mercier says….

Military strategists within Nato have been warning for some time that Russia’s entire strategy is focused around creating challenges and provocations that are fluid, hard to read and consequently politically paralysing….

In February, for example, alliance defence ministers were shut in a room and presented with realistic dossiers of information and presentations from military officials about a hypothetical series of incidents in Lithuania: a cyber attack on key infrastructure that was hard to attribute; a blockade by Russia of the port of Klaipeda; and riots provoked by agents linked to Moscow across the country.

The scenario showed up weaknesses in intelligence gathering and the need for speedy action, according to Gen Mercier, forcing Nato to entirely rethink the way it aggregates and sources intelligence material to present to its politicians….

But it is also a question of resources, he says, adding that if Nato’s European members do not raise defence spending significantly in the coming months, “the credibility of our entire posture will be at stake”.

“We are on the right track … but we need the budget and the manpower,” he adds.

A list of Nato’s military shortcomings is being drawn up by the general and his team and will be presented to defence ministers next year. It is likely to recommend more aircraft able to quickly reinforce the alliance’s eastern frontier and additional ships to ply the seas around Europe.