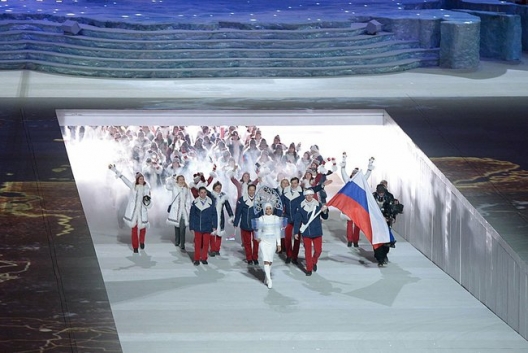 Russia’s team at the Opening Ceremony for the Sochi Olympics (photo: Office of the President of Russia)

Foreign visitors to the Winter Olympics in Sochi are unknowingly wading into a cyber battlefield, the US government and security experts have warned.

Large international events – packed with diplomats, business leaders and celebrities – have become honeypots for computer hackers, while Russia is home to some of the most feared cyber criminals in the world. . . .

But in a sign of the mounting worries over the cyber threat, the US government issued guidance advising American visitors to Sochi to remove all important information from their computers and devices before they travel.

They were also told to assume their communications were being monitored and that they should have “no expectation of privacy” in Russia because of the twin threat from hackers and surveillance from the state. . . .

Ken Geers, a senior global threat analyst with cyber security company FireEye and an ambassador for Nato’s cyber defence centre, said diplomats and some business travellers were usually advised not to take any electronics to Russia.

“I think the Russians may assume this type of venue is a venue for Western spies to enter Russia as a class of potential aggressors,” he said. “From a Russian perspective, they may treat everyone with some suspicion and compromise computers coming from outside Russia.”

He said most normal citizens would not know or think that Sochi was a hub for malware, malicious software, used for espionage.

“An event like Sochi is a contest between intelligences services,” he said. “Everyday folks get caught up to some degree.”