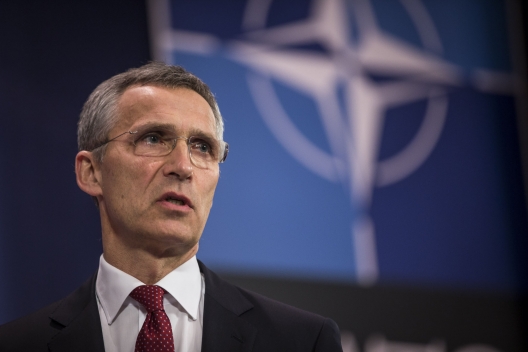 Q: Japanese daily, Mainichi, my name is Saito. I’ve heard in this foreign ministry meeting that you might start cooperation with EU against hybrid attack. Could you elaborate your scope or agenda of this cooperation?

JENS STOLTENBERG: I think that’s an area where there’s great potential for closer cooperation between the European Union and NATO hybrid warfare and how we defend all Allies against hybrid warfare. Because hybrid warfare is about the combination of a military and non-military means, it’s about overt and covert operations; it’s about deception; it’s about using economic tools, communication, disinformation. And we have to have a very comprehensive, a broad response to the hybrid threat or to hybrid warfare.

And therefore we need military means. And there, NATO has of course some unique capabilities and capacity and experience. But we also need a lot of other means to be able to protect our Allies against hybrid warfare related to economic measures, energy, cyber and so on.

So this is an area where there is a great potential for the European Union and NATO working together. I would just mention a few areas where NATO is already adapting to the increased threat of hybrid warfare.

Higher readiness of our forces is a way to deter and also defend against hybrid attacks; because the warning time will be little. And therefore high readiness is important.

Special Operation Forces is key when it comes to many types of hybrid warfare. Better situational awareness understanding is key. So intelligence or surveillance drones we are developing a new capability for surveillance drones which we want to deploy in Sicily. And everything which is ready to situational awareness is key for deferring…. or defending against hybrid attacks.

And the last thing I will mention is of course strategic communication and to be prepared and able to counter all the disinformation we see in connection with the hybrid attacks.