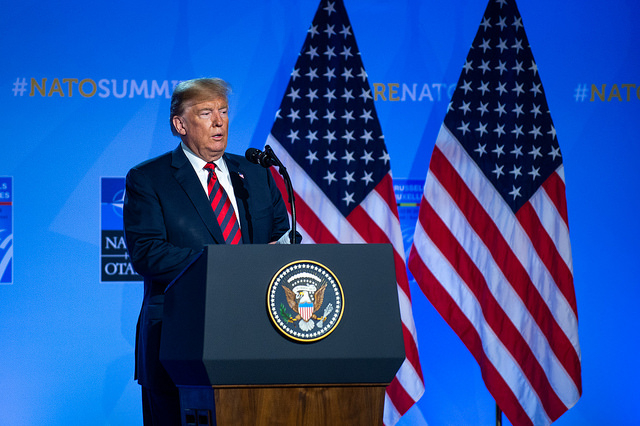 President Donald Trump at the NATO Summit in Brussels, July 12, 2018.

[Acting Secretary of Defense Patrick Shanahan] is working so hard on the military. We have a — we were taken advantage of by so many countries on our military. We’re providing all they want, and they’re not helping us, they’re not doing anything toward helping us monetarily. It’s disgraceful. I’ve been saying it for years. Disgraceful. We’re giving military protection to countries that are very wealthy, and they’re not doing anything for us. You can call them allies if you want, and we have some great allies, but a lot of our allies were taking advantage of our taxpayers and our country. We can’t let that happen.

But there are countries that are poor, that we will — we don’t want anything from them. We want to help them. There are some horrible things going on in the world, and we want to help those people. We don’t want money from them. We don’t want that. We’re not looking for that. But when you have massively wealthy countries that have very little military costs because the United States subsidizes them, so they take advantage of us on military. They could easily pay us the full amounts. And they also take advantage of us on trade.

So, you know, when I say, “I’m sorry, folks, you have pay up” — I shouldn’t be popular in Europe. They do a poll — I was at 88 percent, and now I’m at, you know, very low number — in Europe. I don’t care about Europe. I’m not elected by Europeans; I’m elected by Americans, and by American taxpayers, frankly.

So, you know, I think my relationship, I will tell you, with the leaders of Europe is very good. A lot of them don’t even understand how they got away with it for so many years. I’ll say to Angela, and I’ll say to many of the other leaders — I’m friends with all of them — I’ll say, “How did this ever happen?” And they sort of go like, “I can’t believe it either.” They can’t believe it. You know why? Because they had presidents and other people within administrations in the past that allowed them to get away. Like some of them would say, “Well, no one ever asked us to pay.”

We have negotiations going on with numerous countries right now to pay a lot of money to the United States for what we’re doing for them. I wouldn’t say they’re thrilled. Because they’ve had many, many years where they didn’t have to pay. So now they’re going to have to pay. And if that makes me unpopular in those countries, that’s okay. But we’re doing tremendous service to those countries, and they should at least respect us. They didn’t respect us, and that was the problem….

the military, under past leadership, including for many years, was taken advantage of by other countries — allies and not allies. They were taken advantage of. And our country has to be respected. We’re not respected when we do that, when we’re taking — when horrible things are happening on trade, where we have barriers put up, where we have tariffs put on, and we open our country up, we just opened it up; where cars are sent into our country with virtually no tax, no nothing, and yet they won’t accept our cars. When cars are sent in and they pay no tax, but we’re expected to pay 25, 40, 50 percent, and we they pay nothing? I’ll be honest with you, it’s just not in my DNA. I don’t know how people allowed that in my position — allowed these things to happen.

And we’re not allowing it to happen anymore. I could be the most popular person in Europe. I could be — I could run for any office if I wanted to, but I don’t want to. I want people to treat us fairly. And they’re not.

And it’s not — there’s no angles. There’s no angles. There’s nothing to — you know, when a country sends us 200 soldiers to Iraq, or sends us 100 soldiers from a big country to Syria or to Afghanistan, and then they tell me a hundred times, “Oh, we sent you soldiers. We sent you soldiers,” and that’s one one-hundredth of the money that they’re taking advantage of, they’re just doing that to make me happy, or to make past presidents happy.

I’ve heard past presidents, “Well, they’re involved in the Afghanistan war because they sent us 100 soldiers.” And yet, it’s costing us billions and billions of dollars….

But I don’t like being taken advantage of. What other countries have done for the last long period of time is give us some soldiers and then talk about it like it’s the end of the world, and we’re subsidizing their militaries by billions and billions and billions of dollars. Many, many, many times what those soldiers cost that country.