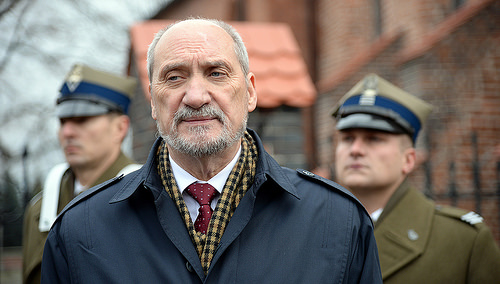 From Henry Foy, Financial Times: Poland has replaced the head of a NATO-affiliated facility in Warsaw during a midnight raid by defence ministry officials and military police on its office, in the latest move by the country’s new government to take control of state agencies.

Defence personnel entered NATO’s Counter Intelligence Center of Excellence in central Warsaw at 1:30am, to remove officials that were not supported by the new administration and appoint a new head, reports Henry Foy in Warsaw.

“This is about guaranteeing the normal functioning of state institutions, which unfortunately do not always function properly,” deputy defence minister Bartosz Kownacki told RMF radio. “Really it was difficult to determine whether there are actually competent people… the previous management….”

The dramatic raid and management change, which was denounced by the previous head of the facility and by opposition politicians, is the latest move by the new right-wing nationalist Law and Justice party to consolidate its power in Poland by packing government agencies, security services, state-owned businesses and the judiciary with party loyalists….

Former defence minister and senior opposition party MP Tomasz Siemoniak said the raid was “unprecedented. “This is probably the first time in NATO’s history that an alliance member has attacked a NATO facility,” he added.

From Piotr Skolimowski, Bloomberg News:  The ministry appointed Colonel Robert Bala as the acting director of the center, which hasn’t yet been accredited by NATO, an alliance official said.

“Polish employees lost access to classified materials and we had to change them,” Foreign Minister Witold Waszczykowski told Trojka public radio. “We’re dealing with the military so we have to act quickly….”

“This is an issue for the Polish authorities,” a NATO official said. “In general terms, Centers of Excellence are international research centers, which are nationally or multi-nationally funded and staffed, and work alongside the Alliance, but they are not NATO bodies.”

From Jarosław Adamowski, Defense News:  The Defense Ministry claims its decision was consulted with the Slovak government.