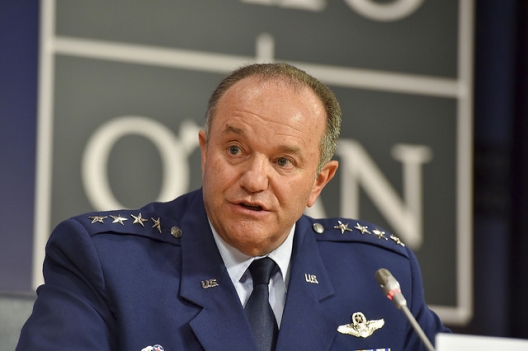 The U.S. has too few intelligence assets focused on the threat from Russia and should concentrate its technical capabilities on Moscow’s growing military might, NATO’s departing supreme allied commander said.

The U.S. has begun to build up the number of intelligence analysts examining Russia, which stood at 13,000 at the height of the Cold War before dipping to a low point of just 1,000 three years ago, said Gen. Philip Breedlove, the top military commander of the North Atlantic Treaty Organization, in an interview.

But Gen. Breedlove said the U.S. needs more technical intelligence assets, the kind of spy satellites the U.S. uses to keep an eye on both troop movements and terrorist training camps, focused on the threat from Russia.

“We see that Russia has not accepted the hand of partnership but has chosen a path of belligerence,” Gen. Breedlove said. “We need to readdress where we’re heading.”

Gen. Breedlove will step down this month after three years in the top military job at NATO, a time in which he has overseen the transformation of the alliance from one focused on expeditionary capabilities, like in Afghanistan, to the defense of Europe in the face of renewed aggression from Russia….

[O]fficials don’t dispute that during the war in Iraq and Afghanistan, intelligence resources were refocused on the threat of terrorism.

“We weren’t focused on Russia when I came in three years ago because we were still trying to cast a paradigm that brought Russia into the fold of Western values,” Gen. Breedlove said. “Russia chose a different path or they were on that path and we didn’t recognize it….”

Robert Work, the deputy secretary of defense, said in an interview that it isn’t just intelligence experts but policy makers too that misjudged Russia. Had Russian intentions been understood, the U.S. would never have pulled its heavy combat brigades out of Europe in 2012, he said.

“It caught the entire policy community by surprise. It is clear Russia has embarked on a much more provocative and aggressive path since 2012. We are now in process to responding,” Mr. Work said Friday, just before a visit with Gen. Breedlove….

Gen. Breedlove said the U.S. had made a reasonable choice to focus its limited intelligence assets on the threat of terrorism. The intelligence community has adjusted by increasing analysts and refocusing on the threat from Russia’s military, he said. The question now, he said, is whether that is enough.

Gen. Breedlove said the U.S. is now wrestling with whether to focus more reconnaissance satellites and other assets on Russian military moves. He said he advocates increased investment in such assets as well as devoting more to keeping watch on Russia.

“What we need to look at now is do we need a refocusing or reallocation … of the technical capabilities,” he said.