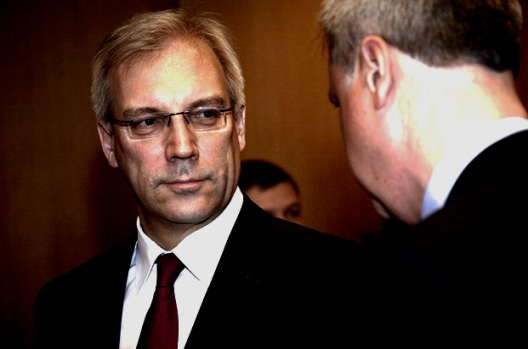 For a year after the North Atlantic Treaty Organization cut back its cooperation with Russia as punishment for the country’s incursions into Ukraine, Russia’s NATO mission has seemed curiously impervious to the deteriorating ties.

Its delegation to the military alliance’s headquarters in Brussels still has more than 50 members, more than the delegations of a number of NATO countries.Not for long. NATO, publicly citing an administrative effort to limit the size of delegations from “partner nations” like Russia, has capped them at 30 members.

But Western officials said the move also followed a confidential assessment by the alliance’s Civilian Intelligence Committee that intelligence agents had been part of Russia’s delegation.

No one is shocked that spies might be in Russia’s delegation, and shrinking its size would hardly eliminate the risk of espionage, said the Western officials, who asked not to be identified talking about intelligence issues. But they said it could make the problem easier to manage….

Last April, NATO decided to curtail military and civilian cooperation with Russia, while maintaining political contacts, because of its role in the Ukraine crisis.

Since then, just four members of Russia’s large delegation have credentials that allow them to go to NATO headquarters without an escort: the ambassador, the deputy ambassador, a driver and an assistant….

The new 30-person ceiling — NATO calls it a “guideline” — is not being imposed immediately. Partner nations have nine months to comply and will be able to decide which staff members to keep. Russia and the other partner nations were officially notified of the new personnel limit last week….

Western officials said Russia might, in fact, be the only partner nation affected by the new cap.

NATO’s intelligence committee, which made the assessment that members of the Russian delegation had been using their status to spy, is led by Norway under a rotating chairmanship and is made up of representatives from the intelligence services of all of the alliance’s members.

The West has previously expelled Russian diplomats for espionage. But the suspension of NATO’s cooperation with Russia and the alliance’s coming headquarters move have provided it with an opportunity to take more far-reaching and, some Western diplomats say, long overdue action.