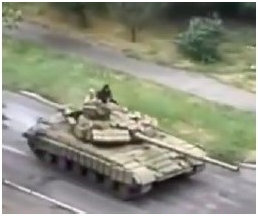 However, the rebels have admitted being helped by “volunteers” from Russia. . . .

The Organization for Security and Cooperation in Europe (OSCE) has reported seeing unmarked convoys in the region in recent days.

Asked about the purpose of the alleged Russian troop deployment, Gen Breedlove replied: “As to their intent, I’m not sure. My strategic team believes that there is a possibility that, as you know, this pocket of separatist Russian-backed forces and Russian forces in the east of Ukraine – it’s not a very contiguous pocket. There are lines of communications that are interrupted. There are airports that are not held by the Russian-backed forces etc.”

“And so it is our first guess that these forces will go in to make this a more contiguous, more whole and capable pocket of land in order to then hold on to it long term.”

Update:  General Breedlove also confirmed that Nato believes Russia is deploying nuclear-capable weapons to Crimea – a reference to reports that Russia is deploying short-range Iskander ballistic missiles there that could potentially be equipped with nuclear warheads.