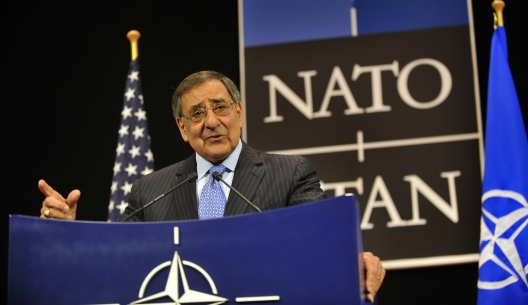 Excerpts from interview of former Secretary of Defense Leon Panetta by Markus Feldenkirchen and Holger Stark of Spiegel, February 14, 2015.

SPIEGEL: Mr. Secretary, how close are we to a real war in the middle of Europe?

SPIEGEL: Many people have tried to decipher Putin’s mindset. You dealt with Russia while you were at the CIA. How does he tick? What’s driving him?

Panetta: It’s pretty obvious that his intent is to try to spread Russian influence, particularly over the former Soviet Union. He is clearly trying to prevent the countries of the former Soviet Union from joining NATO and working with the European Union. There was a time when it was possible to negotiate with him and to try to resolve some of the important issues that we were dealing with. We actually were working with Russia on some important international conflicts and crises. But he has now turned more aggressive, and that’s very dangerous because what he’s doing is clearly planting the seeds of a new Cold War. Therefore, it’s incumbent on the United States and the West to understand what his intentions are and to do everything possible to try to make clear to him that he is not going to get a blank check in terms of what he decides to do. The one thing that I remember from all of my intelligence briefings and my dealings with the Russians is that when you deal with the Russians, you have to deal with them from strength, not from weakness. They understand strength, and if they feel that their opponents are weak, they will take advantage of it.

SPIEGEL: Do you have the impression that Putin is currently playing around with the West?

Panetta: That’s my impression. My impression is that he feels that he can basically manipulate the West to do what he ultimately wants to achieve, and that he feels he’s gotten away with it so far, and that all he has to do is basically play the same game. It’s a cat and mouse game of sorts. Clearly, Russia has lied to the world about what’s going on in Ukraine. They have clearly violated the cease-fire agreements that have been made and so the real issue is going to be whether or not he will really agree to an enforceable cease-fire or whether he will play the same game again….

SPIEGEL: German Chancellor Angela Merkel and a majority of the people in Germany are strongly against delivering arms to Ukraine. Are the Germans too naïve in their dealings with Putin?

Panetta: I wouldn’t say that about Chancellor Merkel because I think she’s provided strong leadership in Europe. I appreciate the diplomatic steps she is taking. But I also think it’s important for her to recognize that if she gets nowhere with her diplomatic efforts then there really is no other alternative but to take stronger steps.

SPIEGEL: Soft power is not going to work?

Panetta: Soft power hasn’t worked so far, and I think when you are dealing with somebody like Putin, the only thing he understands is hard power….

SPIEGEL: Maybe it’s time to acknowledge that the US can’t solve the problem in Ukraine with an adversary like Russia. Maybe this crisis shows America’s limitations.

Panetta: Excuse me, but we can’t live on the basis of that kind of fiction because the reality is that if we stand back and simply allow Russia to do what it’s going to do in Ukraine, that will send a clear message to Putin that Ukraine is just the first step. At some point, we are going to have to draw a line. Based on all kinds of historical lessons, it’s better to draw that line earlier rather than later.