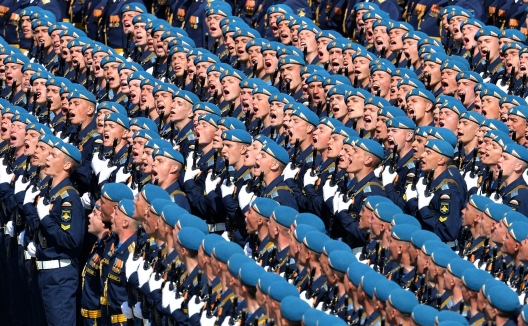 Military parade to mark 70th anniversary of victory in World War II, May 9, 2015 (photo: Office of the President of Russia)

Russian leaders have been promoting the myth of NATO military expansion as part of their justification for Russia’s invasion of Ukraine and annexation of Crimea. Russian President Vladimir Putin himself claims that, “When the infrastructure of a military bloc is moving toward our borders, it causes us some concerns and questions. We need to take some steps in response.” Yet the data shows otherwise.

Prior to Russia’s aggression against Ukraine and NATO’s response to restore deterrence in Europe, there was very little NATO military presence in the Alliance’s frontline states. Even today, despite requests by Eastern allies, there is no major NATO infrastructure closer to Russia than what existed at the end of the Cold War in Germany, Italy, UK, and other Western allies. Russia on the other hand, maintains tens of thousands of troops in several of its neighbors. As NATO Deputy Secretary General Alexander Vershbow recently stated on Twitter, “It is Russia that’s fabricating a NATO ‘threat’ to justify its aggressive actions & attempts to recreate sphere of influence.”