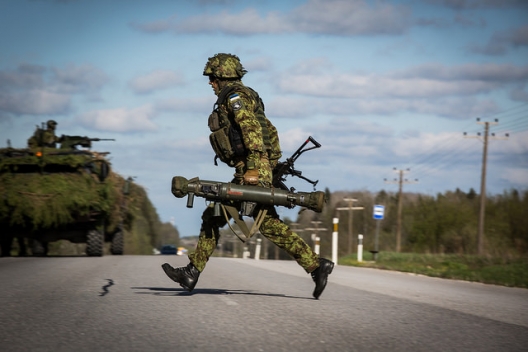 [In hybrid warfare,] soldiers are often the last, not the first into the breach, only appearing once the war has been all but won through political and economic subversion, division, and demoralization. Rather than focusing on fighting and winning that last stage, then, better that NATO and member states put more effort into stopping matters ever reaching it. In other words, a “hybrid defense” response, which, like hybrid war, combines military, political, intelligence and other instruments to win these new model conflicts without, ideally, a shot being fired.

That means adequate, well-trained, and well-regarded police forces able to deal with genuine or manufactured protests. Riot control is a specialized business, and police need not just today’s panoply of intimidating armor and equipment, but the training and seasoning to stand in front of a jeering, jostling mob and neither back down nor overreact.

It means counter-intelligence services with the powers, budgets, and skills to identify and turn, convict, or expel agents, provocateurs, political operators, and those who would fund and stir up divisive local movements.

It means social outreach and a strong emphasis on governance and legitimacy. After all, corruption, the exclusion of minorities and communities — not just Russian-speakers — and public disillusion all create opportunities for Moscow to exploit. Blocking or undermining Russian propaganda campaigns designed to spread division and uncertainty is a matter of national security in this context.

It means proper controls on the flows of money from Russia, even if laundered though thinly veiled front companies in third-party jurisdictions. This money otherwise can be used to buy influence, support local political movements intended to stir up trouble, and take over strategic business sectors. No country likes turning away business, but in the modern world, money is weaponized, and Moscow understands this well.

None of these are new and all are being tackled to greater or lesser extent by all NATO’s frontline states. However, they are rarely considered as part of a comprehensive national security strategy, “target hardening” against hybrid warfare. Nor do they fall within NATO’s traditional remit. That is understandable, as is the generals’ preference to stick to familiar measures such as the creation of the new Very High Readiness Joint Task Force. It cannot be NATO’s job to audit campaign contributions in Latvia, say, or push social inclusion in Romania.

Instead, this creates an opportunity for the European Union, which has long been more interested in governance than war. The most powerful defenses against Russian mischief-making and manipulation are, after all, social cohesion, effective law enforcement, an independent and responsible media, and legitimate, transparent and effective governance. A more strategic and urgent approach to ensuring these are found throughout the European Union is thus a security necessity and not just a public good. Along with its External Action Service, responsible for common foreign policy, there is scope for structures not trying to parallel or challenge NATO on the “kinetic” side of defense, but rather to coordinate non-military defenses, incorporating bodies such as Europol and the new East StratCom counter-propaganda group.