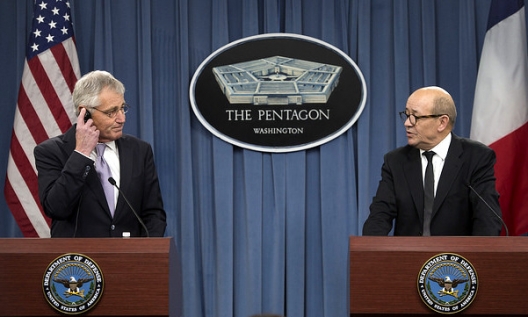 [M]ore than 1,000 French soldiers are still fighting Islamic militants in Mali. Another French intervention force has been dispatched to restore order in the Central African Republic. And [French Defense Minister Jean-Yves] Le Drian is telling a very different story about his country’s role in Africa. In a visit to Washington on Friday, he said France had “assumed the responsibility” of filling a “security vacuum” in the continent that “could otherwise become a crossroads of trafficking and terrorism.”

For the government of François Hollande, this is a costly and risky initiative, and it deserves strong support from the United States. While the Obama administration retreats from areas where al-Qaeda is operating, Paris is reinforcing and reorganizing its military presence across the Sahel region. By the end of this year it expects to have 3,000 troops permanently deployed in four West African countries. That doesn’t count the 1,600 troops in the Central African Republic who, in theory, are engaged in an emergency mission but — as in Mali — likely will find it difficult to depart. . . .

To its credit, the Hollande government accepts that these are long-term challenges; unlike the Obama administration, it has not set artificial deadlines for removing its forces. Mr. Le Drian says 1,000 French counterterrorism troops will remain in Mali indefinitely. There, as in much of the rest of northern Africa and the Middle East, the “tide of war” against al-Qaeda and its allies is not, as President Obama would have it, “receding”; in Africa, it is still coming in.