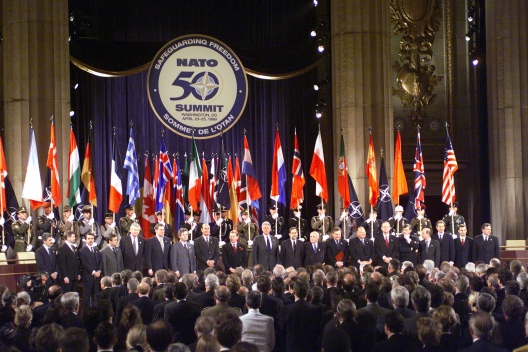 Fifteen years have passed since the Czech Republic, Hungary and Poland joined the NATO military alliance, a decision the ex-Soviet satellites now see as fortuitous given today’s Ukraine standoff between Russia and the West.

“NATO is the safest alliance Poland ever joined,” Polish Prime Minister Donald Tusk said Monday, hours before NATO announced it was deploying reconnaissance aircraft in his country and Romania as part of efforts to monitor the crisis in neighbouring Ukraine. . . .

After a decade of tough negotiations, the Czech Republic and Ukraine’s neighbours Hungary and Poland joined the alliance on March 12, 1999.

This paved the way for a host of other ex-communist Central European states — Bulgaria, Estonia, Latvia, Lithuania, Romania, Slovakia and Slovenia — to follow suit in 2004, thus erasing the divisions of the Cold War. . . .

“There was a kind of security vacuum in this part of the world, which could have been filled by others,” he [former Polish president Aleksander Kwasniewski] said, adding that without NATO membership the Ukrainian conflict would pose “an extremely serious threat” for Poland and the Baltics.

“But today we’re under the NATO umbrella and can sleep more soundly. . . .”

Hungary is likewise satisfied with its decision to join, according to defence expert Istvan Balogh from the Hungarian Institute of International Affairs, the foreign ministry’s think-tank.

“NATO membership has definitely been a net benefit to Hungary. It has anchored us in the transatlantic community,” he told AFP.

“The combat experience we got out of Afghanistan, seeing how a 21st-century military environment works, has also contributed to developing the Hungarian military.”