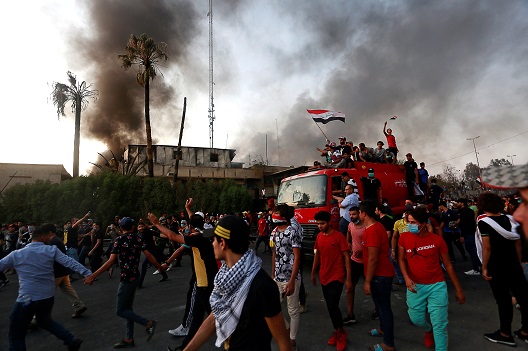 Photo: Iraqi protesters stand on a fire truck during an anti-government protest near the burnt building of the government office in Basra, Iraq September 7, 2018. REUTERS/Alaa al-Marjani

Civilian unrest in Iraq has refocused its attention on Haider al-Abadi and the Islamic Dawa party. Ongoing demonstrations this month in the southern city of Basra indicate trouble ahead for the Iraqi federal government and foreshadow an end to Haider al-Abadi’s run as prime minister, as he does not seek a second term.

For months, protestors have taken to the streets of Basra, outraged with the lack of governmental assistance to the province’s collapsing infrastructure, poverty, and state of affairs. Most recently, the demonstrators set fire to nearly all federal and regional governmental buildings within the city limits. They torched political party offices and Iranian-affiliated paramilitary headquarters, such as the Dawa Party, Iraqiya TV station, Asai’b al-Haq, the Hikma Movement, the Badr Organization, Kata’b al-Imam Ali, and Hezbollah. There were reports of rockets fired toward the US diplomatic mission and blockaded access to Iraq’s only deepwater seaport, Umm Qasr. Some demonstrators raided the West Qurna water treatment plant and took two employees hostage, citing demands to repair Basra’s defective water purification system. Dozens of Basra residents swept the Iranian consulate in protest against Iranian influence in Iraqi affairs; they replaced the Islamic Republic’s flag with the Iraqi national flag, tore a canvassed portrait of Ayatollah Khomeini, and chanted “Iran out, out!” while they set fire to the diplomatic complex.

The nature of these protests is not necessarily new to Iraq, as the Atlantic Council’s Andrea Taylor noted last month. Demonstrations have been common in Iraq’s Shia-predominant southern province, an area historically neglected by Baghdad. However, the September demonstrations are different: southern Iraqis are no longer merely expressing frustration with the federal government and infrastructural negligence, but an anger harbored towards Iraq’s head of state and his affiliated political interests.

Basra is home to more than 80 percent of Iraqi national oil output and accounts for 4 percent of global crude production, soliciting investment from regional and international markets. The wealth produced in Basra’s oil sector starkly contrasts with realities faced by the city’s residents; Basra citizens have suffered under a poisonous and salinated water purification system, lack of electricity and air conditioning, and a rate of unemployment well over the 10.8 percent national average.

Located at a juncture between the Tigris and Euphrates, Basra is historically known for its complex system of winding canals and streams—waterways now filled with garbage and sewage due to unkempt infrastructure. The city’s main source of water, the Shatt Al-Arab river, has been discovered to have high levels of salinity and was recorded to reach 100 percent chemical contamination and 50 percent bacterial pollution. Water treatment plants and stations remained inoperable due to low maintenance and a nearly thirty-year awaited renovation. Electricity supplies were recorded to fall short of 40 percent of demand in Iraq, and compelled Prime Minister Abadi to lay off the Electricity Minister Qasim al-Fahdawi in August, despite his ambitious infrastructural program that promised 24-hour electricity for Iraqis. The High Commissioner for Human Rights reported that Basra citizens often resorted to using old generators to stay cool and refilled railroad tank cars—often used to transport crude oil and gaseous commodities—to access clean water.

This past summer brought a climate of nearly 120 degrees Fahrenheit to Basra, leaving its nearly 18,000 residents scavenging for clean water and air conditioning. Since August 12, city hospitals such as the Abu Al-Khasib hospital have received nearly four-hundred patients per day and reported challenges with treating even fifteen percent of patients cases, leaving many to perish on the waiting room floor.

On September 8, masked Iraqi security forces rode into Basra on armed trucks and organized a series of checkpoints throughout the city’s intersections and roadways. Calm has once again returned to Basra—yet Prime Minister Abadi still faces significant resistance to his effort to regain the trust of Iraq’s southern governates and appease looming political rivals.

Still reeling from a May 2018 landmark parliamentary election, Abadi’s primary task has been to build a coalition government between his Islamic Dawa party and the Sairoon party, led by Shia cleric and populist, Muqtada al-Sadr. While this process should constitutionally last just under three months, the parties have become engrossed in laborious negotiations and have stalled the official formation of the new government.

Despite Abadi promising Basra residents a nearly $3 billion infrastructure package after a series of protests in July, the aid never materialized from Baghdad. Many southern Iraqis have placed blame upon corrupt federal officials that bestow lucrative jobs to political allies instead of experienced technocrats and local residents. However, many have started to criticize Abadi and the Islamic Dawa Party itself. Many of Abadi’s political competitors—new and old—have begun rallying support for Abadi’s departure as prime minister.

Shortly after the Basra riots, Sadr tweeted a warning for Abadi to release the promised infrastructure package “into clean hands,” and to “beware of complacency and negligence.” Sadr initiated an emergency coalition meeting between Sairoon and Dawa, where leaders decided to send an investigative delegation to Basra and fire the heads of the Basra Operations Command and Basra Police, but not release economic aid. Two of the largest parliamentary majorities that won in the May election, Sairoon and Conquest Coalition, have already called for Abadi to step down. Even one of Iraq’s most predominant Shia clerics, Ayatollah al-Sistani, who rarely makes interventions in political affairs, made a call for new political leadership.

The September Basra riots reflect the fragility of Abadi’s leadership and the precarious position of the Abadi-Sadr coalition. The prime minister instigated a series of firings of top officials and created investigative task forces in the wake of Basra, yet his position is far from secure.

The prospect of the prime minister’s departure means many things for Iraq’s foreign relations and stature in the regional order. Abadi’s foreign policy agenda encompasses a close relationship with the United States, having coordinated closely to counter the Islamic State (ISIS) under the Strategic Framework Agreement (SFA). There have been reports of the US Special Presidential Envoy to counter ISIS, Brett McGurk, visiting Iraq to curry more political support for the prime minister in the wake of protests. Meanwhile, Abadi’s political rivals, Sairoon party leader, Muqtada al-Sadr and Conquest Coalition party leader and former prime minister, Nuri al-Maliki, have proven more amenable to Iranian-Iraqi partnerships in the past. While many protesters in Basra took a stand against Iranian presence, there were also reports that claimed Iran backed protestors that attempted to compromise US diplomatic facilities, reflecting a complex thread of political division among southern Iraqis.

Sadr has already declared that his party will no longer support Abadi as a candidate for prime minister, making waning US influence well within Iraq’s cards. Despite southern constituents’ clear resistance against Iranian influence, the replacement of Abadi by the Sadrists or the Conquest Coalition party could still open the gates to more Iranian influence, increasing the presence of Shia paramilitary forces in Iraqi local politics, edging out US leverage in the region, and carving a larger political divide among Iraqi citizens. Abadi is quickly losing clout in Iraq’s political landscape; the prime minister’s waning support among Baghdad’s top officials and constituents paints an uncertain, precarious picture of the future of Iraqi governance.

Caroline Rose is a current MA candidate at the London School of Economics. She is an analyst of Levantine politics and international security. Follow her @CarolineRose8.