This week Iraq has experienced the largest protests to date against Prime Minister Adil Abdul-Mahdi’s government, if not any Iraqi government since the fall of former President Saddam Hussein. The protests were triggered by the unexplained firing of Lieutenant General Abdul Wahab al-Saadi, a counter-terrorism leader who played a critical role in the liberation of Mosul and whose firing was seen as a concession to Iran. The protests rapidly expanded to include grievances associated with poor government services and limited economic opportunities, conditions under which Iraqis have been living since the 1990s and which were only exacerbated by the 2003 US invasion.

Of course, protests are nothing new. In fact, it was protests in Ramadi and Fallujah that gave the Islamic State of Iraq and al-Sham (ISIS) the space it needed to grow support and eventually seize not only those towns but Mosul and much of Ninewa province as well. Moreover, this is not the first time there have been protests outside Sunni-dominated areas or over the lack of economic opportunity and poor government services. In July 2018, protests erupted in Baghdad and Basra, which were also met with violence by Iraqi police.

What seems to be different this time is both the protests’ size—they have spread throughout southern Iraq—and their spontaneity.


What seems to be different this time is both the protests’ size—they have spread throughout southern Iraq—and their spontaneity. Prior protests, such as the ones in 2016 instigated by Moqtadah al Sadr, were often driven by political parties as a way of building support or undermining opponents in the government. This time, however, the protests were catalyzed by not just the perception of Iranian meddling, but the fact that meddling targeted al-Saadi who, along with the Counterterrorism Services (CTS) he led, was largely viewed by Iraqis as effective and non-sectarian. Even Amnesty International, which was critical of the Global Coalition’s overall performance during the battle for Mosul, acknowledged that the CTS under al-Saadi’s command took extra risks to spare civilian lives and treated civilians with “kindness and respect.”

Perhaps what made the decision to re-assign al-Saadi cause such backlash is that Saddam Hussein had a habit of firing, arresting, or executing generals who got too popular due to their battlefield success. Thus, this ill-timed decision may have reinforced the perception that after the successful struggle against ISIS, Iraq is sliding back into the kind of sectarian authoritarianism that gave rise to extremist groups like ISIS in the first place. It should be no surprise then that protestors have shouted anti-Iranian slogans and have burned government buildings and called for the “fall of the regime.”

The situation now is reminiscent of the aftermath of the 1991 Gulf War when fourteen out of eighteen provinces erupted in protest. Those protests only ended after the government’s security forces massacred tens of thousands of Iraqis in the south alone. Of course, that option simply is not available to the Iraqi government. In fact, there have been reports of protestors assisting soldiers sent to confront them, suggesting there is little appetite for violence on that scale. Still, the escalation of violence is possible, especially if militias decide to support a side. However, should the response to the protests go in that direction, we are much more likely to see another Iraqi civil war than an end to the crisis, albeit a bloody one.

The problem for the protestors is that while the government could certainly do more to push back on Iranian influence, it is not likely to turn Iraq’s economy around any time soon. The Prime Minister’s order to the Oil Ministry and other government institutions to establish a 50 percent quota for hiring local workers may assuage some protestors, but it is likely too little too late. As long as there is corruption, poor security, sectarian politics, and an economy dependent on oil and state-owned enterprises, little will improve. Perhaps more to the point, addressing those concerns is not something one person or even one government can take on. It will take broad cooperation across every level of government and civil-society to address the intricate networks of corruption and interest that have so far muffled, if not stifled, Iraq’s recovery.

Getting that kind of consensus is going to take leadership. Fortunately, in this regard there is some good news. The scope and scale of these protests may provide a moment where the government can overcome Iraq’s traditional inertia and implement real reforms. Faced with the alternative of a collapsed government and economy, which will only fuel extremist militant groups of every kind, there may be the will to set aside immediate self-interest and undertake the kind of legal and technical steps necessary not only to reduce corruption but also ensure more money is available for recovery and reconstruction. The government could also take this opportunity to take more meaningful steps to attract foreign investments and develop a private sector, including lowering barriers to entry into the Iraqi market and transitioning away from state-owned enterprises.

Should the government decide to undertake real reform, it will need support from the international community. On this point, the United States needs to be careful. While calls from the US Embassy to avoid violence are certainly appropriate, it is important to remember that Iraqis are not just tired of Iranian meddling, but anyone’s. While the United States, so far, does not seem to be the focus of the protests, a recent Iraqi opinion poll showed a favorability rating for the United States at 22 percent, which at least was higher than the Iranians, who were at 16 percent. The poll also noted, however, that nearly 43 percent of Iraqis believe the United States influences Iraq in a significant way and that 53 percent believe the 2003 invasion’s purpose was to “occupy Iraq and plunder its wealth.” These numbers suggest that a strong, visible response from the United States could just make things worse.

These numbers suggest that a strong, visible response from the United States could just make things worse.

This does not mean the United States should do nothing. Rather, it needs to assist where it can have the greatest impact. If these protests are Iraq’s “it’s the economy, stupid” moment, then the United States should focus its efforts on economic solutions. It can do this by setting conditions for foreign investment, and not only by US companies but also by like-minded partners.

After protests subside, the United States will have an opportunity to act, perhaps a little more visibly. If the Iraqi government chooses to overcome inertia and make real reforms, the United States needs to be prepared to provide the right expertise and support to facilitate those reforms’ success. Once there is a will, the means to grow the economy will require financial infrastructure that allows for the movement of money internationally as well as accounting for it internally. Also, Iraq will need to replace its currently burdensome regulatory requirements with something more efficient. The United States should be prepared to assist with that as well.

Of course, the United States has tried to provide this kind of assistance before. But then, there were too many barriers and greater priorities for those efforts to be effective. Now, however, Iraqis need to seize this moment to lower those barriers and the United States, along with the international community, should step in with the kind of assistance that more directly meets the protestors’ demands for a prosperous and inclusive Iraq.

Dr. C. Anthony Pfaff is a Nonresident Senior Fellow at the Atlantic Council’s Iraq Initiative and a research professor for Strategy, the Military Profession and Ethic at the Strategic Studies Institute at the US Army War College. 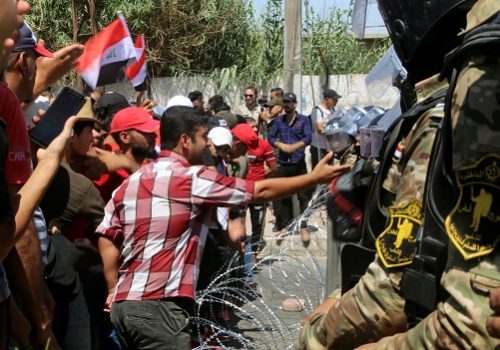 Will Iraq have an uprising after sixteen years of political, social, and economic disillusionment?

Sixteen years have gone by since the American-led invasion of Iraq in 2003, and the country is still suffering from major unresolved political, economic, and social issues. Even the most pessimistic people in Iraq did not think that the situation would be this dire. 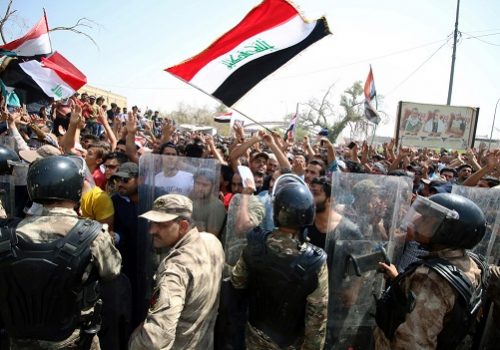 As most headlines continue to focus on US President Donald Trump’s recent meeting with Russia’s President Vladimir Putin and fallout from the NATO summit, Iraq is witnessing some of the largest and most prolonged protests in years. The protests began last week, triggered by water and electricity shortages, unemployment, and government corruption. Despite the growing […] 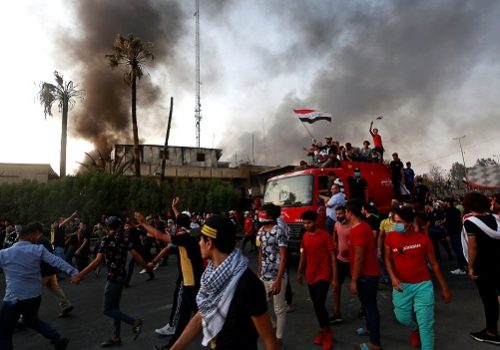 What do the renewed protests in Iraq mean?

Civilian unrest in Iraq has refocused its attention on Haider al-Abadi and the Islamic Dawa party. Ongoing demonstrations this month in the southern city of Basra indicate trouble ahead for the Iraqi federal government and foreshadow an end to Haider al-Abadi’s run as prime minister, as he does not seek a second term.