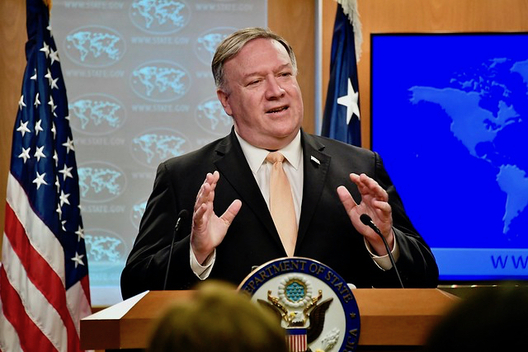 Secretary of State Mike Pompeo delivers remarks to the media in the Press Briefing Room on April 22, 2019. (State Department)

On April 22, Secretary of State Mike Pompeo announced the Trump Administration will not grant any exceptions from sanctions for entities involved in the purchase of petroleum products from Iran. The Trump administration’s apparent decision to compel buyers to zero out their purchases of Iranian oil is likely to have dramatic consequences on the effectiveness of sanctions on Iran and the markets, with the potential to negatively impact both.As another step in President Donald Trump’s May 2018 withdrawal from the Joint Comprehensive Plan of Action (JCPOA), Pompeo’s announcement means that the administration is going further than the sanctions at the height of the pre-JCPOA sanctions regime. The Trump administration will now threaten sanctions against any entity facilitating a significant transaction for the purchase of Iranian petroleum products, and not renew exceptions that expire on May 2 for countries that have previously reduced their purchases of Iranian crude.

The announcement left open the question of whether the Trump administration will allow some countries additional time to wind down their purchases of Iranian crude, though the administration may have overestimated its ability to nuance the sanctions and manage the sudden elimination of over a million barrels of crude from the global market.

The sanctions in question grew out of legislation passed at the end of 2011 under the presidency of Barack Obama. The United States was expanding so-called “secondary sanctions” on Iran, meaning the threat of sanctions against third-country companies for engaging in certain transactions involving Iran, particularly its oil sector. The 2012 National Defense Authorization Act (NDAA), signed into law in 2011, included a provision requiring the president to restrict the opening of correspondent or payable-through accounts by a foreign financial institution determined to have knowingly conducted or facilitated any significant financial transaction with the Central Bank of Iran or another designated Iranian financial institution. While ostensibly a banking sanction, in practice the provision in Section 1245 of the NDAA targeted Iran’s crude oil sales. The statute included a key exception—the so-called Significant Reduction Exception—that the sanctions would not apply with respect to a foreign financial institution, if the president determined that the country with primary jurisdiction over the institution had significantly reduced its volume of crude oil purchased from Iran in the previous 180 days.

The Trump administration and Congress adopted the same Significant Reduction Exception into numerous subsequent sanctions, including the threat of sanctions on any person engaged in a significant transaction for the acquisition of Iranian petroleum products. Bowing to the combination of the threat of sanctions and intense economic engagement from the Obama administration, every major purchaser of Iranian crude received an exception for significantly reducing their purchases of Iranian crude.

Within 180 days of President Trump’s withdrawal from the JCPOA, the president also granted Significant Reduction Exceptions for seven countries—China, Greece, Japan, India, Italy, South Korea, Turkey—and Taiwan, meaning those countries could continue to import Iranian crude and other Iranian petroleum products without the threat of sanctions. It also meant that those importers could receive support from insurers, shippers, brokers, and other service providers who would also be at risk of US sanctions without the benefit of the exception. As a result, the State Department estimates it has taken 1 million barrels per day of Iranian oil off the global market. Those first round of waivers expire on May 2.

Secretary Pompeo made clear that the Trump administration will not be renewing the Significant Reduction Exceptions come May 2.Nonetheless, as of February, some estimates put Iran’s exports at 1.25 million barrels per day. Removing that much crude from the market by May 2 could have dramatic impacts on the global oil market and the price of crude. Indeed, oil prices surged by 3 percent the day of Pompeo’s announcement, and a statement from the White House later in the afternoon appeared intended to calm markets by focusing not on Iran but on cooperation with the UAE and Saudi Arabia to replace Iranian supply. Prices likely would rise further upon announcements of import cuts from major importers like India, Turkey, and Iran ahead of the May 2 deadline.

Pompeo and his team appear, however, to be hedging their bets. Pompeo was clear that there would not be any exceptions granted. However, he did not say that the US government would be imposing sanctions for imports of Iranian petroleum products beginning on May 3. The distinction was even more clear in the subsequent remarks from Special Representative for Iran Brian Hook.

During the press briefing following Pompeo’s announcement, Hook was asked explicitly whether there would be any additional wind-down period for imports of Iranian oil, including for contracts signed prior to the May 2 deadline. Hook refused a meaningful answer. Instead, he insisted that Pompeo had already addressed the question, which was merely hypothetical.

The State Department appears to be giving itself some “wiggle-room” to reach agreements with importers on pending shipments. The flexibility may be necessary to deal with key importers such as China, India, and Turkey, which may have gotten little notice of the Trump administration’s decision on exceptions. The administration could signal to those governments that the United States will hold its fire on sanctions if imports are drawn down to zero in a reasonable time period agreed upon between the two governments.

However, the Trump administration may be playing with tools it does not have. The sanctions in question under the NDAA, and numerous other Executive Orders and statutes that adopted the same exception, do not threaten sanctions exclusively against governments. Instead, the parties most at risk of US sanctions are the companies involved: refineries, shippers, insurers, brokers, financiers, and bankers.

Any understanding between governments would have little benefit unless all the other parties involved in the transaction also are aware of the agreement and are confident that the United States will not impose sanctions for any company’s role in the purchase. Otherwise, the Trump administration could be a victim of its own success: companies—terrified of the risk of secondary sanctions—are likely to refuse to take part in a transaction that could put them at risk of US sanctions absent a public and credible assurance from the US government. A quiet agreement between two governments will not do the trick.

Even the best outcome for the Trump administration is likely to lead to some difficult choices. If the US government does successfully discourage all major purchases of Iranian crude, and the markets remain stable, some Iranian crude will still find its way to buyers through the black market. At that point, the administration may have some sticky choices to make. It almost certainly will be faced with the choice of sanctioning companies from allies or other global powers, such as the UAE and China, or else looking the other way and seeming feckless on the sanctions it claims to implement so strenuously.

Whatever the outcome of the decision, the Trump administration is walking down a path with difficult decisions, and may not even have the flexibility and choices to address the situation it believes to be in its hands.

David Mortlock is a nonresident senior fellow with the Atlantic Council’s Global Energy Center. He is chair of the Global Trade & Investment group at the law firm Willkie Farr & Gallagher LLP, where he focuses on sanctions, export controls, and other international trade issues. Formerly, he was Director for International Economic Affairs for the National Security Council.