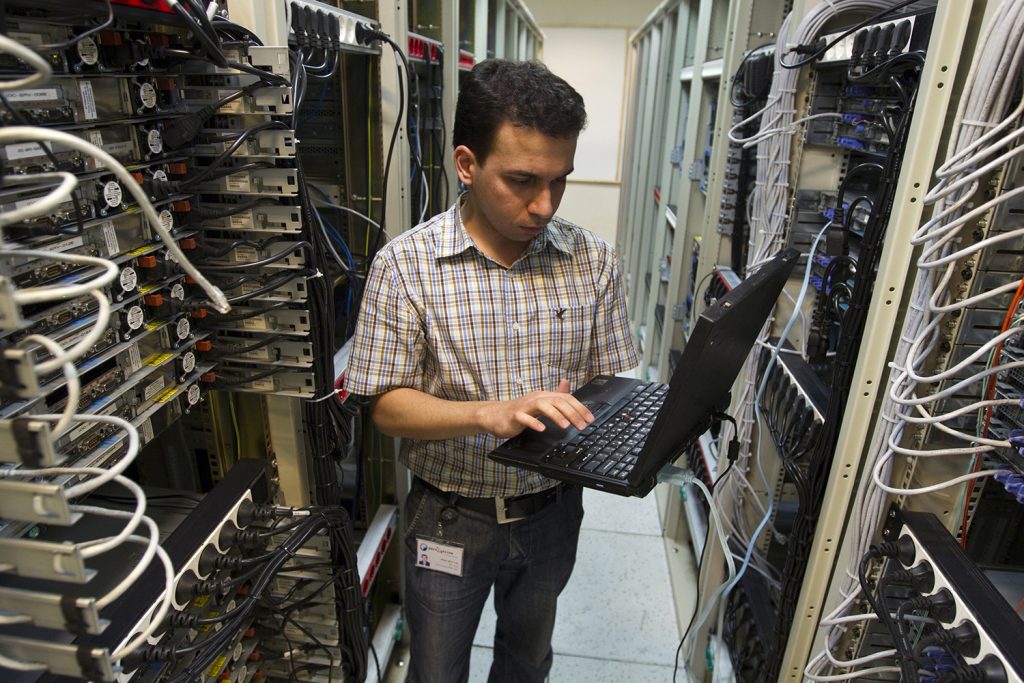 Since Iranian President Hassan Rouhani took office in 2013, the National Information Network (NIN) was at the top of his administration’s agenda. On August 27, 2016, Iran launched the first phase of the NIN and almost a year later Mohammad-Javad Azari Jahromi, the minister of Information and Communications Technology, said in an interview that “The National Information Network is the evidence of an economic, elite prosperity as well as the evidence of our E-Commerce prosperity.”

Today we know that the NIN, also known as the national internet, goes beyond network infrastructure. The NIN is backed by laws, regulations, and policies inside the country. As part of this program, new financial policies encourage Iranians to use the NIN’s infrastructure through subsites and local traffic. For instance, watching a video on the Iranian video sharing website Aparat costs half the price of watching that very video on YouTube. This was designed to urge businesses and startups to move their servers into Iran and also to encourage Iranians to use domestic services.

Yet these attempts received very little support from the Iranian people due to a general lack of trust in the government, as well as the unreliability of network infrastructure inside the country and past state-imposed censorship. Thus Iranian internet users often avoided the use and purchase of domestic servers—prompting Iranian officials to admit time and time again that their attempts to expand the national intranet faced defeat.

On November 16, 2019, a day after protests broke out across Iran initially due to a massive increase in fuel prices, the Iranian government imposed an almost complete internet blackout. This is a violation of the right to access information, especially in circumstances where protesters use social media to share information and/or footage of state violence. The internet shutdown made it harder to obtain information on the those killed and injured. The Islamic Republic killed at least 304 protesters but the real number is likely much higher. Additionally, Iranian officials claim that over 7,000 protestors have since been arrested. This strategic use of an internet shutdown allowed the Iranian government to increase its oppressive and violent practices in riot control while attracting little news coverage. It was also proof that the NIN project is working.

Although the government restored most internet access within five days, impoverished provinces such as Sistan and Baluchistan did not regain access to cellular data for weeks. Once the internet was restored, more videos and images of the protests surfaced on social media platforms, showcasing the brutality of the Iranian government in repressing political dissent.

Over the past few years, ICT Minister Azari Jahromi has repeatedly announced Iran’s plans to launch its own national intranet as a national substitute for the global internet. The current developments in the national intranet program enable the Iranian government to maintain the internet shutdown long enough for security forces to repress protests by any means necessary—particularly the use of violence. Without US-imposed technology sanctions, however, launching this plan would make it more difficult for the government. The United States has, in fact, played a crucial role in contributing to Tehran’s push for the national intranet by imposing said unilateral sanctions on the Iranian people.

Prior to US sanctions, Iran was heavily dependent on global network infrastructure and any disruption to the connection between Iran and the outside world would have had tremendous consequences, financially and otherwise. In the wake of the December 2017 – January 2018 protests, the Iranian government could not shutdown the internet for more than thirty minutes, because of the high price of maintaining the blackout. According to an estimate from NetBlocks, a non-partisan digital rights organization, the recent internet shutdown in Iran cost the government more than $300 million. This, by comparison, was several times higher before the current US sanctions and Iran’s national intranet project.

Two years after the first internet shutdown, and following the Trump administration’s maximum pressure campaign on Iran since 2018, the world’s largest tech companies such as Amazon, Google, and Digital Ocean stopped providing their services and platforms to Iranians. Companies were subsequently forced to move to Iranian cloud services inside the country and use not only the NIN infrastructure, but also national services such as Daal and Balad, Iran’s local version of Google Map, and Cafe Bazaar, the Iranian version of an Android store.

US sanctions not only affect tech companies but also individuals, such as network engineers and tech researchers. During the shutdown, these individuals had the technical knowledge to find a solution. However, out of fear of legal consequences due to sanctions, engineers refused to help provide access to Iran’s domestic network, which thereby would allow researchers to study Iran’s national infrastructure.

After the recent internet shutdown, the focus currently is on how to provide internet access in the wake of a future blackout. Some on social media suggested using satellite internet which unfortunately costs a lot. There is also no proof that it’s a secure option. However, the focus should be on how to prevent another shutdown.

The key to preventing another blackout is to reverse the migration from Iran-based servers back out of the country. Many Iranians are ready to use international infrastructure and services simply because they do not trust their government, but this is impossible due to US sanctions. The international community, tech companies and internet freedom community should work together to be more active and help provide access to the international infrastructure and services. It’s worth noting that this is not just an Iran issue, as other authoritarian governments have shutdown and/or slowed their internet as well.

Today, Iran has created almost 90 percent of its national intranet. During the recent internet shutdown crisis, only about 7 percent of users across the country had internet access. This means Iran is gradually achieving its goal of independence from the global internet.

Lifting US tech sanctions will not only help maintain this 7 percent connectivity to the outside world, but also make another blackout significantly costly for the Iranian government. Connection to the global internet, albeit limited, will give the internet freedom community a chance to provide technical support to Iranian citizens in order to regain internet access at times of crisis.