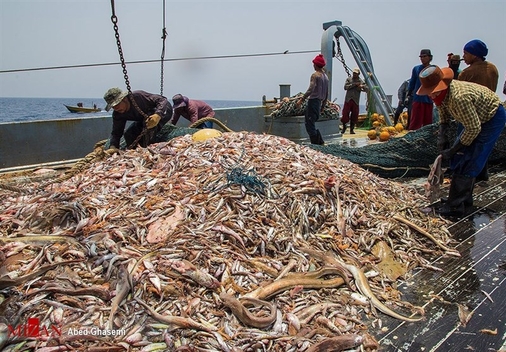 Fishers in the Oman Sea (Mizan)

Two of Beijing’s close allies, Iran and Pakistan, have been increasingly impacted by China’s growing appetite for fish, both for domestic consumption and to supply its processed fish industry. Stricter regulations in Pakistan and an internal political fight in Iran could make it harder for China to expand its fishing industry into their waters.Friction between Iranian political factions, chiefly the Islamic Revolutionary Guard Corps (IRGC) and President Hassan Rouhani’s government, is on the rise over the growing presence of Chinese fishing vessels in Iranian waters. Growing dissatisfaction by local fishermen over Chinese industrial-style fishing is contributing to the dispute. In Pakistan, meanwhile, new policies and regulations may impact seafood exports to China.

However, both countries need China more than ever to help withstand US pressure, so it’s unclear whether either will be willing to antagonize Beijing over fishing rights.

China is one of the world’s largest importers and exporters of fish. Its fishery industry is among its most profitable export businesses. However, overfishing and depleted regional fish stocks have forced China to look for new resources around the world. Some countries, including in the European Union, send fish to China for processing and re-export back to those countries. Others have established their own fish processing facilities in China. However, domestic demand for fish in China continues to outstrip supply.

China is Pakistan’s largest fish export market. But Pakistan’s own resources are being depleted for many reasons, most critically over-fishing.In recent months, Pakistani officials have put in place a new deep-sea policy that bans fishing beyond 12 miles offshore. The policy has been effective in reducing the size of the catch but is highly unpopular within the fishing industry, which points to the foreign currency Pakistan earns from fish exports as an argument forrelaxing or removing the ban. The new policy has reduced Pakistan’s seafood exports and hurt its economy.

Pakistan is hoping that the China-Pakistan Economic Corridor (CPEC) will increase the profitability of its fish export business. CPEC has already improved methods of seafood transportation from Pakistan to China. Transportation of fish by land takes a fraction of time it takes by sea, is more cost effective, and decreases loss of quality before the fish arrives in China. Construction of an international airport at Pakistan’s Gwadar seaport, one of CPEC’s projects, is expected to further increase Pakistan’s seafood exports to China.

However, not everyone in Pakistan has welcomed these projects. Local fishermen in Gwadar port recently protested the construction of an expressway that has cutoff routes to the Arabian Sea. Strikes have frequently impacted fish exports to the United Arab Emirates, Saudi Arabia, Kuwait, and other regional destinations.

Yet Pakistan is far ahead of Iran when it comes to fishing. The industry in Pakistan is an essential part of the economy and has a complex structure. Its numerous trawlers, which drag large fishing nets through water, are equipped to extract many types of seafood.

In contrast, Iran’s trawlers are either rented or foreign-owned, mainly from China.

In February 2019 the IRGC navy stopped several foreign trawlers. Alireza Tangsiri, commander of the IRGC navy, spoke of a “mafia” network behind Chinese trawling boats. Only days later, fourteen trawlers—including five foreign ships—were stopped in Jask Port in Hormozgan province on the Makran coast. According to Fars News Agency, which is associated with the IRGC, even after the arrests, trawlers docked in Bandar Abbas continued fishing with the help of the Iran Fishery Company (Shilat).

Another report by Fars criticized the head of Hormozgan’s fishery company for stating that fish exports in the province bring $130 million into the economy. The Fars report countered by describing the “harm” that Chinese fishing causes to marine life and the local fishing industry.

The Iran Fishery Company in Hormozgan says China’s target is lanternfish, which is used as food for fish farms. It argues that the fish has a short lifespan—about a year—and is wasted if not used. It also says that lanternfish are plentiful and that, if Iran were to restrict Chinese fishing, neighboring Oman would benefit instead.

Iranian Foreign Minister Mohammad Javad Zarif, in an interview last September, defended the presence of Chinese vessels in the Oman Sea. He contended that it is not unusual to let other countries use resources that would be wastedif not used. “Many countries do that,” Zarif said.

However, there is concern that these deep-sea trawlers also catch other kind of animals including baby dolphins and whales, which are killed and thrown back into the ocean.

Iran’s parliament has now taken up the issue. Some members have criticized giving permission to Chinese ships, arguing that letting China fish in Iranian waters has negatively impacted local fisheries and the livelihoods of local fishermen. Fatemeh Zolghadr, a reformist parliament member, questioned the merit of subsiding fuel for Chinese fishing boats when “fishing of lanternfish has no economic value.” According to Zolghadr, while on the surface China says it’s catching lanternfish, in reality it takes all kind of fish. “The death of 150 dolphins cannot have been accidental. Chinese ships have frequently entered the space of the local fishers,” she added.

Among the ironies of the current debate is the position taken by the IRGC. It’s interesting to watch Iranian conservatives profess concern for the “destruction of the environment,” considering that they have shown little regard for the environment in the past. In fact, the IRGC is known to be behind the prosecution of a number of conservationists.

IRGC admiral Mansour Ravankar reported in February about building a base to fight sea trafficking. Ravankar said that Supreme Leader Ayatollah Ali Khamenei “is seriously following up on the fight against fuel and drug trafficking and illegal fishing” and has requested help from the IRGC. According to Ravankar, a command has been formed that includes the IRGC navy, Iranian law enforcement, the Basij militia, and judiciary personnel to investigate sea trafficking.

While the IRGC suddenly portrays itself as a defender of the environment, China is resource-hungrier than ever before. Given that both Iran and Pakistan are facing serious economic troubles and are increasingly dependent on China, marine life in the region is likely to be increasingly threatened.