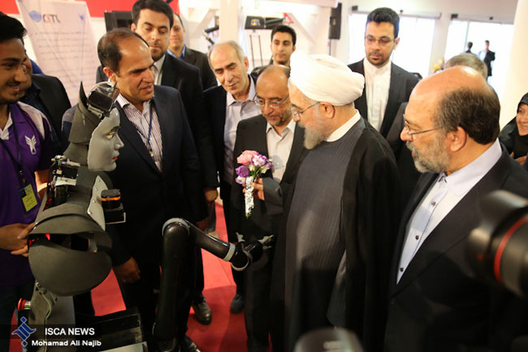 While US-reimposed sanctions have severely damaged the Iranian economy, one sector is still thriving: emerging technologies.

The latest success story is the Artificial Intelligence-powered navigation app BALAD which hit a record 1.2 million downloads within a few days of its launch in March.

Buzz about AI in Iran is not limited to BALAD. There have been proposals for establishing a Ministry of Artificial Intelligence to sharply reduce Iran’s reliance on oil exports and talk about a Robotic Army.

Iran is ranked fourteenth in global AI research power according to published articles. It stands higher than Turkey, Poland, Brazil, Taiwan, South Korea and the Netherlands. Furthermore, Iran’s Islamic Azad University is ranked the fifth most productive institution in AI research in the world, with 104 total articles, behind the Chinese Academy of Science, MIT, Hong Kong Polytech University, and Singapore’s Nanyang Technological University.

Iran has another advantage in AI research: it is the fifth biggest producer of STEM (science, technology, engineering, and mathematics) graduates with 335,000 per year, after China, India, the United States, and Russia. Most of these graduates are engineers who can contribute to AI research. In 2018, more than seventy state and private universities in Iran offered majors in AI and robotics.

Iran’s relatively large population of 80 million, among whom at least half have regular access to the Internet, provides an important source of raw data for any AI initiative. Among the top fifty websites in Iran—based on Alexa’s listing—only five are foreign. This provides access to information not necessarily available in countries where the Internet is dominated by international giants. An interesting comparison is Saudi Arabia, where thirty of the top fifty sites are foreign.

Apart from AI research, many applications have been developed domestically. Tehran’s traffic control heavily relies on License Plate Recognition (LPR) technologies developed domestically within the last decade based on pattern recognition, machine learning, and neural networks. Some companies have developed face recognition and iris recognition software. In the technology of text recognition, there is even more private investment and high percentages of precision reached by the main players in the field. In the finance sector, the first national contest for algorithmic trading was held last year in Tehran.

Not surprisingly, Iran has also directed investments in AI to the military and security fields. There is news of an Iranian robotic army including suicide robots, auto-run mine detectors, and robotic machine guns. There are claims that Iran has tested some of its military robots in the battle against the Islamic State of Iraq and al-Sham (ISIS) in Iraq. Iran’s rapid advances in drone and cyber technologies have intensified fears that it might use swarm intelligence (SI) in armed drones and boats to threaten the US Navy in the Persian Gulf.

Though all these advances sound promising, especially when compared to the position of most of its neighbors, Iran—in the bigger picture of the global AI race—is still small. AI is governed by the Matthew effect: “to those who have everything more will be given; from those who have nothing everything will be taken.” It simply means that the current gap between the global haves and have-nots of AI will widen in the future.

While it is true that Iran is a hotbed for training skilled engineers, given the lack of employment opportunities and social and economic problems in the country, graduates of top universities often end up migrating to North America and Europe. Further, AI research requires investments that are beyond the reach and capabilities of Iran’s economy, especially in a time of sanctions. While global car companies, for example, are expected to spend tens of billions of dollars on research and development in autonomous vehicle technology by 2023, Iran’s minuscule and sparse spending in this sector means it would have almost zero effect on its development. The most successful story for Iran in this field is a 15-kilometer test of an autonomous vehicle in laboratory conditions in 2017. Even in those AI applications in which Iran has a geographical, linguistic or cultural advantage, often the leaders are global giants, not Iranian companies. One example is Persian speech recognition in which Google leads, with investments going back almost a decade.

AI is a graveyard for the old-generation industrial mentality. While the US, China and Northern Europe will account for $13.4 trillion of an anticipated $15.7 trillion boost to global GDP from AI by 2030, Iran’s isolation, shortage of foreign investment, lack of national strategy, and global connectivity would suggest increasing marginalization. Given that more than half of AI-driven gains in GDP come from labor productivity—use of robots and autonomous vehicles—more AI would be a death sentence for Iran’s heavily labour-intensive manufacturing and service sector.

So far, Iran lacks a national strategy for AI. China announced its New Generation of Artificial Intelligence Development Plan in 2017, US President Donald Trump issued an Executive Order on Maintaining American Leadership in Artificial Intelligence in February and similar attempts have either already been made in France and India, or are in the process of being made in Russia and by dozens of other countries. Though the Research Center of Iran’s parliament has published several reports about AI including its uses in the legislature, and the Ministry of Information and Communications Technology has started working on a National Digital Transformation Project, these are far from comprehensive AI strategies. Still in the context of renewed US sanctions and depressed oil exports, AI is a relative bright spot that should become a focus for long-term investment and economic growth.

Mahmoud Pargoo is an expert on religion and politics of post-revolutionary Iran and a PhD graduate in Social and Political Thought from Sydney’s Australian Catholic University. Follow him on Twitter: @mpargoo.