At midnight on November 15, the Iranian government announced it was hiking petrol prices by at least 50 percent. Although the government justified the measure—itself part of badly-needed structural reforms—as a means of generating cash handouts for 60 million of the country’s poorest citizens (or 75 percent of the population), it triggered large-scale protests across much of the country.

Petrol prices in Iran, the holder of the world’s fourth largest proven petroleum reserves, are already among the world’s lowest and most heavily subsidized. Yet, Iranians have borne the brunt of their country’s deepening economic crisis, which is a result of US sanctions and certainly its effect on state revenues, but also massive corruption, gross mismanagement, and the diversion of state funds to support Iran’s allies in the region. Even more galling for many of these Iranians is that the 1979 Revolution and the Islamic Republic it birthed were in large part predicated on bringing about socioeconomic justice.

Protests have since 18 November spread to at least several dozen cities and provincial towns including Ahvaz, Mashhad, Tehran, Esfahan, Tabriz, Kermanshah, Yazd, Shiraz, and Bandar Abbas. In many locations, protesters blocked roads and highways by stalling their vehicles. Security forces have also intervened, accompanying a rise in the number of casualties with over twenty dead and over a thousand arrested. Protesters reportedly burnt a bus intended for ferrying security forces along Tabriz’s expressway, and another in Tehran. Social media also reported the torching of a Islamic Revolutionary Guard Corps (IRGC) base in Sanandaj. Meanwhile in several areas including the capital, protesters reportedly vandalized and set ablaze banks, as well as the municipality building in Tehran’s Salehiyye district, the governor’s office in Qods, and a seminary in Esfahan. For many protesters, these targets of arson—force, finance, and faith—represent grating symbols of a state no longer in touch with its people’s needs.

The underlying economic drivers of the unrest are apparent in social media hashtags such as بنزین۳۰۰۰تومانی# and گرانی_بنزین# (“3,000 Toman petrol” and “expensive petrol”). But while many of the protest slogans reflect economic frustration—calling, for instance, for the government to care for its own population and leave Gaza and Lebanon alone—some continue to directly challenge the regime. The slogans include “death to the dictator”, and one accuses Supreme Leader Ayatollah Ali Khamenei of “playing God” while the nation is reduced to “begging”.

In a November 17 speech, Khamenei defended the fuel subsidy decision adopted by all three branches of government. He clarified that the issue lay beyond his expertise, but that Iranians ought to support the decision, and with “optimism”. Several parliamentarians who had tabled an urgent bill proposing to undo the price hikes apparently ditched the bill after the speech was delivered. Khamenei has also accused the West and Iranian opposition groups of stoking these protests, and authorities have shut down internet access, along with the Shalamcheh border crossing with southern Iraq.

The current wave of mass protests comes just under two years after the last wave began during December 2017 – January 2018, which were also over corruption, mismanagement, and the state of the economy. But in the interim, smaller-scale protests and strikes—led by teachers, truck drivers, sugar workers, amongst others—have continued to ebb and flow around the country over issues including the cut-throat privatization of previously state-owned entities, allegations of fraud against financial credit institutions of which many are affiliated with the IRGC, and the failure of private companies and the state sector to pay workers’ wages on time.

What makes these current protests even riskier for Iran’s leaders is that they come amid parallel massive anti-government protests already rocking the ruling elites in Lebanon and Iraq—two countries where Iran has invested untold funds, time, and energy in hopes of bolstering its own regional power, influence and security. In Lebanon, protesters have prompted Prime Minister Saad Hariri—admittedly not a big fan of the Islamic Republic—to step down, while in Iraq, Prime Minister Adil Abdul-Mahdi is looking at proposing a package of reforms until elections next year—a time-buying solution Tehran backs while it reconsiders its next moves there.

What makes these current protests even riskier for Iran’s leaders is that they come amid parallel massive anti-government protests already rocking the ruling elites in Lebanon and Iraq.

Iran’s current internal unrest may taper away as a result of a mix of unflinching state suppression and politically less risky socioeconomic policy adjustments, or, alternatively, either cancellation of the fuel price increase altogether or proof that it has begun benefitting most Iranians. But if it continues or repeats in the coming months, internal unrest at such scales and violence levels will sharpen the already growing domestic and external challenges facing Iran including sanctions, militarized Gulf tensions, the difficulties of balancing its books without provoking heavier protests (the state budget is due in a few weeks’ time and, unprecedentedly, is to cover a two-year period without factoring in projected oil revenues), and instability in Iraq and Lebanon—compelling Iran to try and break the impasse.

While Tehran may prefer to wait out the 2020 US presidential elections, it may also play down its own preconditions and lean towards talks with the US to pursue an economic peace. This is a likely scenario if President Donald Trump also offers a concession by, for instance, temporarily permitting Iran to export oil. Another, perhaps less likely option is to retrench some of its financial commitments to regional allies. According to one estimate, Iranian spending in the region amounted to $16 billion over the past eight years or so, excluding some $700 million disbursed annually on Hezbollah alone, let alone Iranian-backed Palestinian factions. A third, and far riskier possibility is a hardening of Tehran’s position to deflect and divert domestic grievances, including through military adventurism and nuclear brinkmanship, and in order to increase its negotiation leverage vis-à-vis Washington. All three come with domestic political or external strategic risks. But something has to give.

In light of the growing domestic anger in part directed against Rouhani’s economic scorecard, alongside the disappointment of the 2015 nuclear agreement Rouhani helped bring about, Iran’s parliamentary elections in three months’ time are likely to further empower hardliners opposed to talks with the US. This could in turn prepare the stage, during Iran’s mid-2021 presidential elections, for the rise of a far more confrontational and uncompromising alternative.

Kevjn Lim is a PhD researcher for the School of Political Science, Government and International Affairs at Tel Aviv University. He is a Middle East and North Africa contributor for IHS Markit. 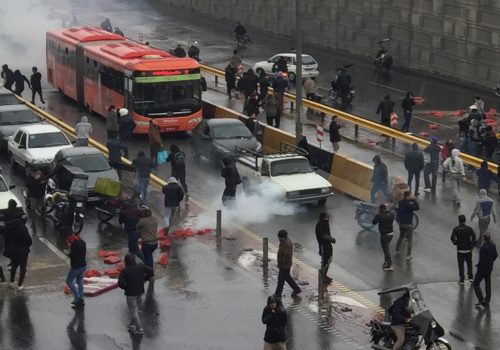 Iran protests: A quest for reform turns into widespread discontent

Popular protests are flaring up in the Middle East. From Lebanon to Iraq and now Iran, they show the weakening of the social contract between the population and their government. In the Islamic Republic, the post-revolutionary social contract was born on a populist promises of justice, but decades of endemic political and economic inefficiencies wiped […] 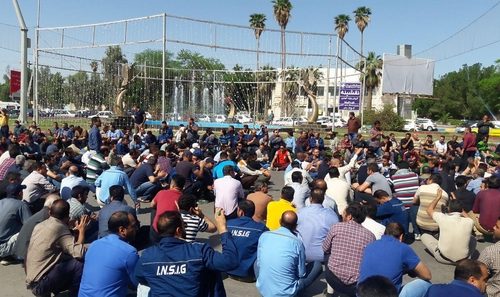 Here’s How Protests and Strikes Are Leading Change in Iran

What do farmers in Esfahan, unemployed youth in Rafsanjan, teachers and students in Hamadan, and fraud victims in Kerman all have in common? On the face of it, not much other than being Iranian. But there is another commonality: They all staged protests on the same day, December 12.  Reporting on Iran tends to focus on the country’s […] 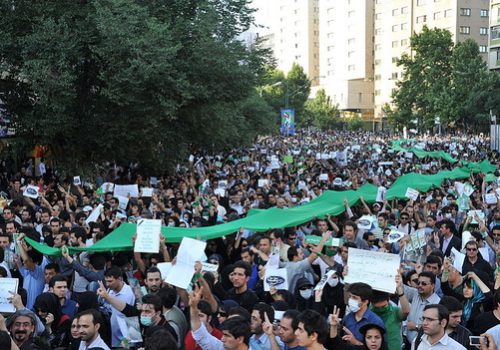 Protests are a permanent feature of Iran

July 15, 2009 was a historic day in Iran’s recent history. Some three million people marched in silence on Enghelab (Revolution) Street in the capital of Tehran to convey their anger at the Islamic Republic in the most peaceful manner. The regime had disconnected cell phone services in a failed effort to prevent the march, […]