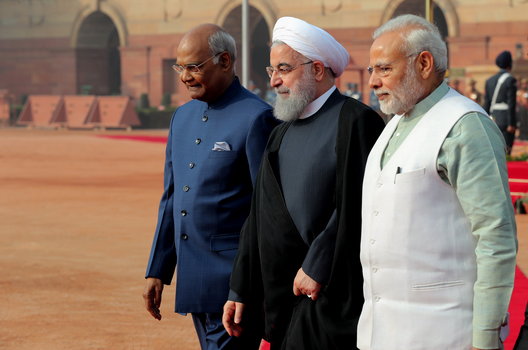 The development of the strategic Chabahar port is becoming a success story in the Iran-India relationship.

The Iranian port on the Gulf of Oman is a key project for the two countries. Originally agreed to in 2003 during the presidency of Mohammad Khatami and the prime ministership of Atal Bihari Vajpayee, the project was suspended during the George W. Bush and early Barack Obama administrations due to US sanctions against Iran over its nuclear program.

The project was revived with the signing of the historic deal between the five permanent members of the United Nations Security Council and Germany in which Iran agreed to curb its nuclear activities in exchange for lifting nuclear-related sanctions. This provided India with a strategic opportunity to increase trade and investment links with Iran.

When the Joint Comprehensive Plan of Action (JCPOA) went into full implementation in January 2016, there was speculation that Indian investment in Iran in the fields of energy, transport and banking would rise to $20 billion. However, progress has been slower than anticipated given continued uncertainty over the JCPOA and President Trump’s repeated threats to withdraw from the agreement.

Despite the hostile rhetoric still emanating from Washington, Iranian President Hassan Rouhani recently arrived in Hyderabad for a three-day visit to India and held important meetings with Indian Prime Minister Narendra Modi. On Saturday, the two countries signed nine agreements across areas including trade promotion, travel, medicine and agriculture. They also agreed to expand counter-terrorism cooperation, saying that conditions that give rise to extremist ideologies must be addressed.

The most notable of their agreements — leasing operational control of the Shahid Beheshti port, phase one of Chabahar, to India for 18 months — enhances the port’s potential to connect the entire region.

India has sought to develop Chabahar as a way to improve access to Afghan and Central Asian markets, while sidestepping arch-rival Pakistan. Since the overthrow of the Taliban by the United States, Pakistan has viewed development aid by India to Afghanistan as a threat. Indeed, from Chabahar and existing Iranian road networks, India will have easier access to four cities in Afghanistan – Herat, Kandahar, Kabul and Mazar-e-Sharif.

The port has the potential to pay strategic dividends to Afghanistan as an alternative to the Pakistani ports of Karachi and Gwadar. The new infrastructure enables Afghans to access the Arabian Sea through Iran and could help stimulate more investment and trade from other regional powers. A joint statement released by Afghan President Mohammad Ashraf Ghani and Prime Minister Narendra Modi prior to the agreement’s signing envisioned the Chabahar port’s potential to “provide major impetus to Afghanistan’s economic reconstruction efforts.” Indeed, recent reports have shown traffic being diverted from Karachi to Chabahar.

Furthermore, as India’s first major overseas port venture, Chabahar is seen by the Modi government as an alternative to China’s Belt and Road Initiative (BRI), which looks to build trade and transport links across Asia.

Iran, for its part, plans to use the port as a transit hub for access to markets in the northern part of the Indian Ocean and Central Asia. The port is seen as a competitor to Gwadar, developed by China at the cost of $57 billion and a mere 100 km east of Chabahar. Moreover, the project is a strategic consideration by the Iranian government to promote greater economic growth and opportunity in its underdeveloped southeastern territory.

Significantly, the United States has not stated any objections to Indian and Afghan plans to utilize Chabahar port. In October 2017, Secretary of State Rex Tillerson said, in the context of India’s venture in the port, that Washington will not interfere with, “legitimate” business activities or agreements that, “are in place that promote economic development and activity to the benefit of our friends and allies as well.”

Upon completion of the port, it will be easily connected to the 7,200 km International North-South Transort Corridor (INSTC), a route that predates the BRI and was initiated by India, Iran, and Russia in 2000. The INSTC will link the Indian Ocean, Persian Gulf and the Caspian Sea through Iran and extend to the northern corners of Europe through Russia. The INSTC, in combination with Chabahar, may boost trade from India to Eurasia to 20-30 million tons of goods per year, worth an estimated $170 billion ($107.4 billion in imports and $60.6 billion in exports).

The INSTC has recently expanded to include 11 new members: Azerbaijan, Armenia, Belarus, Kazakhstan, Kyrgyz Republic, Oman, Syria, Tajikistan, Turkey, Ukraine, and Bulgaria (as observer). It is expected that Estonia, Finland and Latvia will join in the near future.