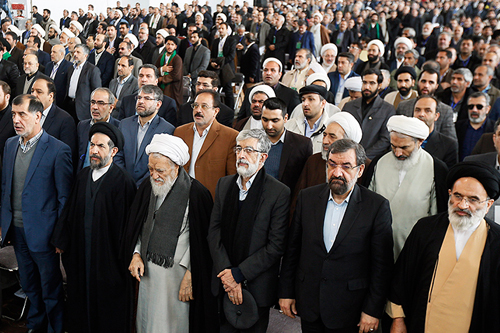 Using fixed categories to describe Iranian politics is often a risk. Western readings are frequently imbued with misconceptions and prejudices due to an Orientalist approach. At the same time, the official narrative of the Islamic Republic reflects a self-representation in conscious reaction to Western views of Iran. These two readings clash with each other at the expense of a deep and fair understanding of Iranian politics.

The Western interpretation of Iran’s politics and domestic dynamics is often based on a dichotomous reading that confines spaces and actors within two confronting dimensions. Political debates are described as a constant clash between conservatives and reformists, pragmatists and radicals, or moderates and hardliners.

Internal factionalism is defined and thus understood as a contradiction between more strict political forces, linked to unelected and cleric-dominated institutions, and more moderate ones that emerge from direct elections and are struggling to introduce gradual reforms.

Terms like radicalism and conservatism come from a Western historical-political process and do not always fit the Iranian context. Translation is also a problem as is evident in the use of the word “principalist,” from the Persian usulgarayan—followers of principles or usul. In Western literature about Iran, this term refers to hardliners who emerged in the political arena after 2004 and consolidated their power during the presidency of Mahmoud Ahmadinejad. However, a group opposing Ahmadinejad in 2008 parliamentary elections used the word usulgarayanto distinguish itself from the president’s circle.

In the West, there is a deep misunderstanding of Persian nomenclature that leads to the misattribution of Western labels to Iranian political groups. Descriptions of the Supreme Leader Ayatollah Ali Khamenei are emblematic of this shallow analysis. Khamenei has been labelled a conservative figure, suggesting orthodox adherence to revolutionary values and political factions linked to conservatism. What this label neglects is Khamenei’s ability to move within the political arena, maintaining a conservative posture but generally avoiding fractures and deep crises in the system (the post-2009 election period is an exception). During the presidency of Ahmadinejad’s successor, Hassan Rouhani, Khamenei has proven himself to be a pragmatic leader able to read the internal dynamics of the country and rejecting the intransigent posture often attributed to Iranian conservatives.

Orientalist readings also generate misconceptions about the relations between the state and society. Iranian society is often described as liberal, educated, modern and in an endless struggle with the political elite. The latter are labelled as oppressive, authoritarian and embracing religious traditionalism. When protests occur in the country, Western media disseminates images of women removing their veils to emphasize modernity and a demand for more personal freedom. However, Western media misinterpreted many of the protests that occurred at the end of 2017 and beginning of 2018 as political when the primary motivation was economic.

The image of women unveiling themselves embodies the Orientalist lens of the West in reading Iranian dynamics. Moreover, in the Western perspective, criticism of compulsory hijab is a symbol of social redemption in Iran and a priority for the emancipation of Iranian women. This perspective, however, tends to slight years of women’s activism for more rights in the family, in employment and in politics in which rejection of the compulsory veil is only a minor grievance and mainly an urban and middle-class phenomenon.

Iranian society, as well as the political elite, is active, pluralistic and in a constant redefinition of its identity. Trying to overcome fixed categories and biased interpretations could help create a more nuanced understanding of internal dynamics in place of the unconditional condemnation of the government and excessive praise of a part of society. Both the Iranian population and the government have witnessed profound transformation that cannot be ignored, nor be understoodthroughdichotomous approaches.

At the official level, the Islamic Republic insists on concepts such as self-sufficiency and the economy of resistance. This narrative re-emerges every time relations with Western states are facing a phase of confrontation as they are now with the US withdrawal from the 2015 nuclear deal. There are important economic, political and rhetorical reasons behind the calls for self-sufficiency, which attempts to crystalize national identity vis-à-visthe outside world. In building its own political identity, post-revolutionary Iran inherited an anti-Western narrative. The emphasis on national traditions and Iran’s long history also provided a strong sense of distinctiveness that underlined the emphasis on independence. However, Tehran has also shown a deep commitment to try to overcome political and economic isolation, first by establishing a “critical dialogue” with the European Union in the 1990s, then a “comprehensive” dialogue in the 2000s and finally, the Joint Comprehensive Plan of Action. These pragmatic policies, while emphasizing the need for dialogue with the West, never really abandoned the domestic rhetoric of confrontation and mistrust. The heritage of Jalal Al-e Ahmad’s “Westoxification” as a rejection of Western cultural paradigms is still evident at the official level.

Despite such antagonistic rhetoric, however, the Islamic Republic is in constant exchange with the West, from a cultural, political and economic point of view. The Western gaze should overcome partial readings to avoid diplomatic deadlock and try to understand Iran with more nuance and objectivity.