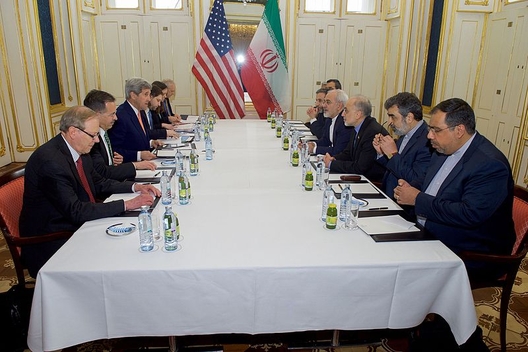 US Secretary of State John Kerry, Iranian Foreign Minister Javad Zarif, and their respective advisers sit across from one another on January 16, 2015 in Vienna, Austria (US Department of State)

With the advent of another presidential election cycle in the United States, many US and foreign politicians and policy advocates have already begun thinking about recommendations for the next occupant of the White House.

In both domestic and foreign affairs, it will not be sufficient to simply revisit decisions made by President Donald Trump but to come up with a proactive agenda for a new president—or a second Trump administration.

In regard to Iran, by 2021, it should be abundantly clear whether the “maximum pressure” campaign initiated by President Trump in his first term has succeeded or failed. If Iran has not succumbed to sanctions and returned to negotiations for a new and “better” Joint Comprehensive Plan of Action (JCPOA)—or substantially altered other policies of concern to Washington—the next US administration would be well advised to review its strategy and adopt another approach.

An obvious first step is to return the US to compliance with the JCPOA in a package of executive orders that also reverses other counterproductive decisions, such as the “Muslim” ban, which disproportionately hurts Iranians and Iranian-Americans. For the longer term, however, the US should seek early negotiations with Iran and P5+1 partners on a JCPOA 2.0 that establishes a firmer foundation for non-proliferation and conflict resolution in the Middle East.

To gain Iranian assent to new talks, Washington will need to alter its unremittingly hostile tone toward Tehran. The over-the-top vilification of the Islamic Republic employed by Trump, his secretary of state and other top advisers is not conducive to diplomacy and demonstrates a double standard when compared with gentler treatment of equally if not more brutal regimes in Saudi Arabia and North Korea. Iranians—like people everywhere—respond poorly to insults; as heirs to a millennia-old culture, they are especially sensitive to criticism from foreign powers. At the same time, the State Department should be given the go-ahead to resume people-to-people exchanges with Iran that show respect for Iranian achievements and have contributed greatly to goodwill and mutual progress in sports, the arts, and science.

Another precondition for a better outcome with Iran is building a truly multilateral coalition that extends beyond narrow regional backing for current US policies. While Israel, Saudi Arabia and the United Arab Emirates need to be consulted about issues affecting their national security, they should not have veto power over US diplomacy with Iran. The P5+1 format that achieved the JCPOA and enshrined that agreement in a UN Security Council resolution could be revived for follow-on talks, with other formats created as appropriate.

The next US administration cannot hope to achieve an improvement over the JCPOA without offering Iran incentives less susceptible to the whims of successive occupants of the White House. While it is understandable—given Republican control of Congress—that President Barack Obama relied on his executive powers to provide Iran with sanctions relief, this made those provisions inherently fragile. It is not necessary to submit any new agreement to Congress as a treaty. It may be easier to introduce legislation removing specific sanctions against Iran in return for Iranian concessions; this would require only a majority vote in both chambers instead of a two-thirds vote in the Senate.

The components of a JCPOA 2.0 could include:

Admittedly, this is an ambitious agenda for US-Iran diplomacy. However, the past forty years of hostility, interrupted by only brief periods of cooperation and compromise, have shown that peace and security in the Middle East cannot be achieved without an improvement in US-Iran ties. Both countries would benefit enormously from détente and normalization that would grant Iranians the benefits of integration into the international economy and allow the United States to further scale back its military presence on Iran’s borders.

Even if only another partial agreement is reached, it is better than a status quo in which the United States is isolated from an international consensus in support of the JCPOA and US regional allies hedge against the “sunset” of curbs on Iran’s nuclear program and US troop withdrawal. While the United States and Iran may not return to the close relationship they enjoyed prior to the 1979 revolution, they can learn to interact in ways less destructive to their citizens, the Middle East and the wider international community.

Barbara Slavin is director of the Future of Iran Initiative at the Atlantic Council. Follow her on Twitter: @barbaraslavin1.