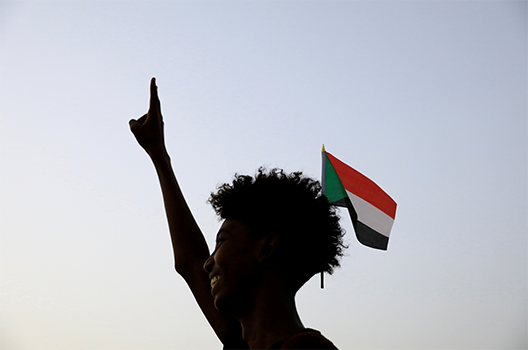 A Sudanese demonstrator, seeking to revive a push for civilian rule in ongoing tumult since the overthrow of former President Omar al-Bashir more than two months ago, makes a victory sign during a demonstration in Khartoum, Sudan, June 27, 2019. REUTERS/Umit Bektas

Sudan’s Transitional Military Council (TMC) signed a political power-sharing agreement today with the Declaration of Freedom and Change Forces (DFC), the umbrella group of trade unions, professional associations, students, and opposition political parties that brought down thirty years of autocratic rule and have stood their ground since April in the face of military rulers thinking they might perpetuate the former regime by changing some of its lead actors.

The agreement–the signing of which was witnessed in Khartoum this morning by the United States, the European Union, the United Nations, the Intergovernmental Authority on Development, and the Arab League–settles little, delays a lot, and creates a set of expectations that will be hard to meet.

But at the risk of being pollyannish, it’s worth acknowledging what the agreement does do. It does lay out a concrete timeframe for the transition: thirty-nine months. It also establishes a sovereignty council of TMC and DFC members, a Council of ministers with a Prime Minister to be appointed by the DFC, and a legislative Council, comprised by two-thirds of DFC members.

Beyond what can best be described as a framework agreement, one Sudanese colleague charitably called it: “a very good foundation from which to start building a new Sudan that is good for all its people and avoids our country spiraling out of control.” Indeed, Sudan has been on the brink of catastrophe since the military forcibly shut down a pro-democracy sit-in on June 3, killing possibly hundreds of civilians, shutting off the Internet, imprisoning opposition members, and reminding everyone what military rule could look like if the negotiations fail.

To its credit, this deal, which is not so much flawed as it is silent on the big questions, does shed light on the secretive negotiations that have been taking place these past few weeks. It also diffuses some of the anxiety on the streets of Sudan, where people still fear the ongoing deployment of the brutal, paramilitary Rapid Support Forces (RSF) across major cities. The deal’s greatest strength is the thin glimmer of hope alluded to throughout the four-page agreement that paints a picture of what this new Sudan could look like: technocratic civilians running a functioning government, stabilizing the economy, drafting a democratic and pluralistic constitution, and Sudan getting out from under its decades of international opprobrium and biting sanctions.

But if one draws hope from reading between the lines of this agreement, skepticism can be found in the words on the page. Pessimism abounds over all that is left unaddressed.

The first cause for head scratching relates to the investigation of the crimes and human rights abuses committed since the military take-over. The DFC has maintained since the start of negotiations that a credible international investigation must be held into the killings of civilians and any members of the TMC implicated (presumably to include General Mohamed Hamdan Dagalo, known as  “Hemedti,” whose RSF lead the atrocities) must be banned from office during the transition. But as it currently reads, the investigation will be Sudanese-owned and operated with “African support, if needed,” suggesting both that justice will be delayed, if not denied, and that those military leaders with blood on their hands will be in a position to maintain power through a transition.

But perhaps the most baffling element, both in its shear ambition and its untethering to reality, is the list of “Functions for the Transition Period,” comprising a laundry list of every ailment from which Sudan suffers. The agreement commits to, among other things:

There’s a reason that so many Sudanese who sacrificed so much on the streets these past months feel at once buoyed by the hope of a reduction in tensions and a return to some normalcy, but also disappointed that the military has appeared to walk away from this first round of negotiations with the stronger hand.  But where the rubber will meet the road and where Sudan’s democratic aspirations will ultimately lie is in the Constitutional Charter, still being negotiated, which will lay out not the structure of the transition that today’s political deal does, but rather the process, powers, and functions of the institutions and positions outlined today.

Until we can get greater clarity on how the Sovereign Council will function, how it will relate to the Prime Minister and his Council of Ministers, and what the duties, responsibilities and authorities of the Legislative Council will be, today’s agreement will remain little more than words on a page.

Whether they realized it or not, however, by inviting in the international community to witness today’s signing, they invited in international scrutiny and advocacy to ensure what comes next is not only the embodiment of the principles of Sudan’s democratic revolution, but that it has the teeth to implement those principles.

The inverse is also now true.  By standing up on the dais with a blood-soaked ruler like Hemedti to witness this agreement, those institutions and governments who attested to and conferred legitimacy on a document so full of holes and questions now have not only the opportunity but the obligation to remain actively involved in the formulation of a lasting transitional agreement that checks and reduces the power of the armed forces, seeks justice and transparency for the crimes that have been committed, and begins to implement the promise of a new Sudan that reflects and protects the rights, values, and diversity that so many Sudanese have fought and died for over the last thirty years.

Cameron Hudson is a senior fellow at the Atlantic Council’s Africa Center. Previously he served as the chief of staff to the special envoy for Sudan and as director for African Affairs on the National Security Council in the George W. Bush administration. Follow him on Twitter @_hudsonc.