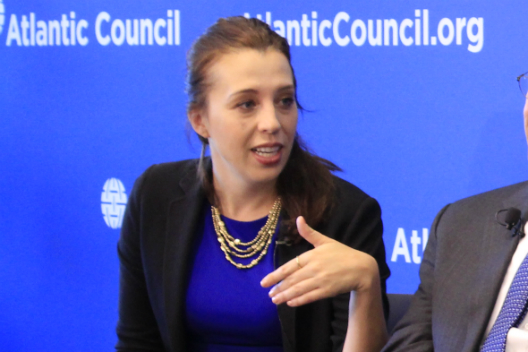 On Tuesday, January 23rd, Africa Center Senior Fellow Aubrey Hruby testified on US-Africa trade and investment before the US International Trade Commission hearing on US Trade and Investment with Sub-Saharan Africa: Recent Developments, #332-564.

Distinguished members of the committee, Ambassadors, and fellow witnesses:

I would like to begin by thanking you, not only for the opportunity to testify before you today, but also the attention that the United States International Trade Commission (USITC) has given to the topic of trade and investment with our partners across Sub-Saharan Africa (SSA).

My name is Aubrey Hruby. I’m a Senior Fellow with the Africa Center at the Atlantic Council and I’ve spent the better part of my career advising Fortune 500 companies to design and implement successful investment and market entry strategies for over twenty African markets. I will devote my testimony to the following themes: 1) an assessment of US trade with SSA; 2) Africa’s increasing diversity of trading partners; 3) the role of the WTO’s TFA in stimulating economic growth and development on the continent; and 4) recommendations for the future.

The US has long been a major partner in SSA trade, but it is no secret that the US commercial relationship with the continent remains underdeveloped. The 49 countries that make up SSA just barely make it into the top ten list of America’s largest trade relationships, and US trade with AGOA participants has lagged since its 2008 peak while African trade relationships with other countries – including China, India, Turkey, and more – have expanded.

While the European Union (EU) and the United States remain major partners in SSA trade, Chinese trade with the continent has surged, increasing by 83 percent from 2009 to 2011 and surpassing $200 billion for the first time in 2013. US trade with the continent, for comparison, peaked in 2008 at just under $105 billion and has fallen to the mid-30s ever since.

Moreover, other emerging economies, including India and Turkey, are also increasing their trade with Africa. India has overtaken China as the world’s fastest-growing economy and many predict India-Africa trade to surpass $100 billion by 2020. Trade between Africa and Turkey, for its part, increased threefold between 2003 and 2015, to $17.5 billion. Turkish businesses, particularly small and medium-sized enterprises (SMEs), are carving out a niche in construction and in information and communications technology, and Turkish Airlines is becoming a prominent carrier to the region, performing beyond expectations in 2017.

Intra-African trade is also increasing. According to the International Monetary Fund, intra-African exports grew from $41 billion in 2010 to $61 billion in 2013. This growth is clearly visible on a national scale—currently, two of Kenya’s top-five export partners are regional neighbors (Uganda and Zambia), with Tanzania, South Africa, and other SSA nations also constituting substantial export destinations. However, despite recent progress, Africa continues to lag behind the rest of the world in the amount of trade that occurs within the continent. From 2002 to 2010, intraregional trade in Africa fluctuated between 8 and 11 percent, staying consistently low. By 2014, intraregional trade in Africa rose to a mere 12 percent. For comparison, intraregional trade in the developing economies of Asia was 17 percent as of 2012, and in Latin America, it has remained stagnant at around 20 percent.

As economic growth trajectories in several SSA economies continue to look up in 2018, after suffering a sharp slowdown in 2016, countries now have greater diversity of potential partnerships than ever before. While the US and the EU will continue remain major partners in SSA trade, the continent has made great strides in diversifying its partners and capitalizing on trade investment opportunities with new countries. US investors are working in a more globally complex Africa.

2.       Flexible and phased agreements are the way forward in Africa

The African Growth and Opportunity Act (AGOA) has formed the bedrock of US-Africa trade policy since the early 2000s and has broad brand value in Africa, representing a business and partnership approach to the historic relationship. AGOA was never meant to be a panacea or replace homegrown growth/reform policies in African countries.  It was enacted to allow African countries time-limited access to the US market, with the hope that they would one day “graduate” from the program and move on to more advanced trade agreements. It might have been 15 years early in terms of having widespread impact, but it put down a marker for the US that remains strong today. It has produced a couple hundred thousand jobs in the apparel sector and stands poised for greater success given current macroeconomic trends, including higher wage rates in China and SSA’s potential to develop many new low-cost manufacturing jobs. In many ways, AGOA is more poised for success today than ever before.

While the Morocco FTA is a possible example of a way forward beyond AGOA, the failure of the US-SADC FTA negotiations ten years ago shows that there is still much ground to cover in adapting the US approach to FTA negotiations to developing country realities that are limited by institutional capacity, high levels of poverty, and a narrow export base. Flexible and phased agreements are the way of the future and the Trade Facilitation Agreement’s ratification process may prove educational.

The WTO’s Trade Facilitation Agreement (TFA), which entered into force on February 22, 2017, following its ratification by two-thirds of the WTO membership, has the potential to transform African markets. While it is largely too soon to tell how impactful the TFA will be for US-SSA trade as the implementation of the ratified agreement has not yet hit the one-year mark, 25 of the 44 WTO member states in Africa have already ratified, and the three tiered country-led commitment process, coupled with investment incentives, has the potential to boost the exports of less economically developed countries by 35 percent, increase overall economic growth by 3.5 percent per annum, and ease access to foreign markets. The US should continue to support the ratification and implementation of the TFA, and work with African member states to assist with the implementation of their commitments.

Lastly, I would like to underscore that Africa’s growing number of international trading partners should not and will not preclude American business success on the continent. American companies simply need to be more artful in leveraging the United States’ competitive advantages. Policy makers crafting the commercial aspects of US-Africa policy should focus on sectors in which US companies have a distinct competitive edge, and not force competition in areas that have long been ceded to other global players. Policy makers should also prioritize programs, partnerships, and projects that effectively support US small and medium-sized enterprises (SMEs) to grow through success in African markets.

American sectors positioned for success in African markets include:

·         Professional and business services: Arthur D. Little was the world’s first management consulting firm, and the US has been a dominant player in the service economy ever since. Strengths include: legal, accounting, strategy consulting, higher education, and engineering and design services. As African companies continue to grow in terms of revenue and reach, the business environment in which they operate becomes more sophisticated, particularly if they begin to attract international private equity investment or if they expand across borders. US companies providing professional and business services support that growth, and should capitalize on the opportunity.

·         Finance: The United States is a financial powerhouse, accounting for five of the world’s top ten global financial centers. Lack of capital is a pervasive challenge in African markets and American firms have an opportunity to provide essential services.

·         Media, Entertainment, and Information: The US entertainment industry dominates the global market, and American music has made its way to even the most remote African villages. With the creative and cultural industries booming on the continent, the US film and music industries, with their long-standing partnerships with banks and funds across the world, could play a critical role in taking the African creative industries to the next level in terms of profitability and sustainability.

·         Agribusiness: American agribusiness is industrial in nature, giving it significant research and development capacity, large economies of scale, and global reach. Over 70 percent of all Africans depend on agriculture for their livelihoods. Yet, African agriculture is among the most unproductive in the world—most Africans working in farming are smallholders, producing much smaller yields than their counterparts in other emerging markets. Given the region is projected to need more than double the amount of food, feed, and biofuel in 2050 than it did in 2012, US agribusiness firms specializing in seeds, irrigation, machinery, and crop science have enormous potential to bring their expertise to bear on the continent for mutually beneficial outcomes.

·         Renewable Energy: Although the United States lags behind other countries in some parts of the renewable energy sector (i.e., solar panel production), it has several competitive strengths such as engineering and high-quality product design. Renewable energy has a central role to play in advancing African development, and matching unparalleled American design and engineering with the African market can provide new solutions that could free millions from energy poverty.

The US-SSA trade relationship is underdeveloped, and US commercial participation in African markets is still very much evolving. Given competition from a diversity of potential partners is likely to intensify, US strategy vis-à-vis trade with Africa should focus on areas of competitive advantage to create jobs domestically and promote stability and security in African markets through economic development. Winning the global market of the future will require ceding some battlegrounds to better-suited players while focusing efforts in the arenas in which success is most likely. Strategic prioritization and buy-in from public and private-sector entities is key to unlocking the American competitive business edge, broaden and deepen US-Africa commercial relations, and maximize the benefits to US business and the American people.